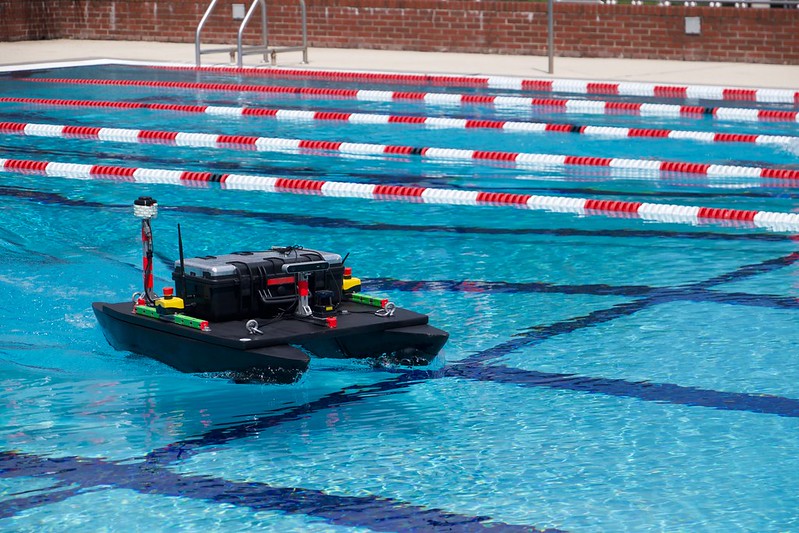 It is always exciting when robotics research can be pushed to its limits, whether that be in competition or real-world applications. Recently, a research team from the University of Louisiana of Lafayette used a Clearpath Husky UGV, TurtleBot2, and our Heron USV simulator in preparation for RoboBoat 2020; a robotics competition where students must develop their own autonomous surface vehicles. In a variety of events, teams must test their robot’s maneuverability and navigation against various situations meant to replicate current challenges in the maritime industry, such as coastal surveillance.

The team was a collaboration between the Department of Mechanical Engineering at the University of Louisiana at Lafayette, the C.R.A.W.LAB, and UL Lafayette RoboBoat 2020. The research was conducted under the leadership of Associate Professor Dr. Joshua Vaughan and student-led by Team Captain Benjamin Armentor and Vice-Captain Joseph Stevens. The team itself was then made up of several undergraduate researchers including Andrew Durand, Bradley Este, Nathan Madsen, and Thomas Poché, Masters student Dallas Mitchell, and finally Ph.D. student Gerald Eaglin. 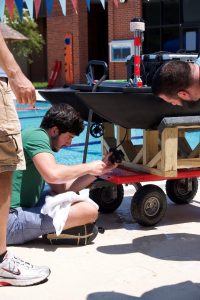 While RoboBoat2020 is typically held at Reed Canal Park in Daytona Beach, Florida between June 22 – 28, 2020, this year due to COVID-19, the event was forced to turn digital. However, the competition was still fierce as the teams were not only required to successfully execute their autonomous surface vehicles but also incorporate rigorous technical design documentation and presentations. Finally, once their designs were completed, teams would have to put their autonomous vehicle behavior to the test through a navigation channel riddled with obstacles with several objectives that included delivering objects, hitting a set maneuvering speed, and returning safely to dock.

In addition to taking part in robotics challenges, the team is also working towards robotics innovation. The C.R.A.W.LAB at the University of Louisiana at Lafayette, for example, performs automation and controls research across a fairly broad range of applications, from autonomous maritime systems to robots for inspection and maintenance to industrial automation. 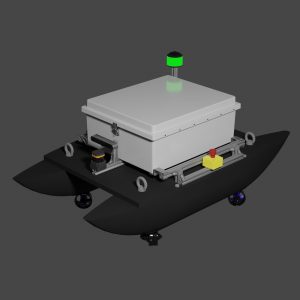 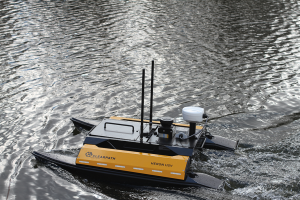 “The ‘completeness’ of the Clearpath systems [let] us focus on the higher-level aspects of the research and/or the development for the RoboBoat contest.” – Associate Professor Dr. Joshua Vaughan

To begin, the team based the simulation of their RoboBoat 2020 entry on our Heron USV platform, saving them considerable time and resources that would usually have been spent entirely developing the simulation from scratch. By using our Heron USV Simulator for RoboBoat 2020 they alleviated two core technical challenges behind developing and implementing systems and algorithms necessary for autonomous maritime systems: 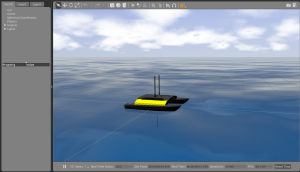 To combat many of these testing challenges, the team utilized ROS/gazebo simulations and the Husky UGV and TurtleBot2 hardware. Specifically for RobotBoat 2020, they extensively leveraged the Heron simulation package which they extended to include their own sensor package and thruster configuration. A Clearpath Husky UGV and TurtleBot2 were then used to test their mapping, obstacle identification and avoidance, and path planning algorithms. On the second place winning boat, the team used Zed cameras and Hokuyo UTM-30LX-EW Scanning Laser Rangefinders on both the bow and stern. These were used for localization and obstacle avoidance. In addition, the set-up had a GPS system and IMU. The primary communication between the boat and the shore was Wi-Fi based, although a separate LoRA-based system was used for the E-stop. Finally, they utilized both Jetson TX2s (for main control and sensor processing) and a Raspberry Pi. 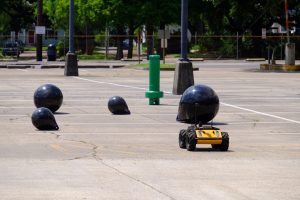 Husky UGV being used for bouy ID and avoidance testing

The team found the Turtlebot2 and our ROS tutorials extremely useful in getting students comfortable with ROS as well as our ROS guides to provide each student a clear path toward ROS competency. Without the Heron USV simulator, the team would have had to resort to rolling their own ROS/gazebo simulation of the boat, whereas, without Husky UGV or TurtleBot2, they would’ve sunk time and resources into on-water testing. With Clearpath systems, the team was able to save themselves considerable time and effort to focus on their own research.

Overall, the head of the C.R.A.W.LAB, Dr. Joshua Vaughan, enjoyed the stress reliever of having platforms like Husky UGV and Turtlebot2 that are pre-designed and ready to go. As he said, “the ‘completeness’ of the Clearpath systems lets us focus on the higher-level aspects of the research and/or the development for the RoboBoat contest.”

Using Clearpath systems, the team was able to compete at RoboBoat 2019 and 2020, and they plan to compete in the 2021 contest as well. They loved competing in this experience which is run by RoboNation, but they’ve also had great runs at events like the Maritime RobotX Challenge. In the 2020 RoboBoat competition they were awarded 2nd Overall, 3rd in Technical Design Report, and were awarded a special award for Testing on the Horizon. Furthermore, they were also granted a special award for manufacturing in the 2019 RoboBoat competition.

The team’s achievements have not only netted them recognition in the robotics competition community and exceptional research progress but also have provided them with a three-year Louisiana Board of Regents Industrial Ties Research Subprogram (ITRS) grant. This connected them with their industry partner, ASV Global who is now part of L3 Harris. Furthermore, they’ve received support from VectorNav, AWC (who helped secure them a Hammond enclosure), and ClickBond.

To learn more about the Heron USV Simulator, check out our blog post from last year.

If you are looking for a robot to prototype your applications and algorithms with, check out our website or reach out to us today.