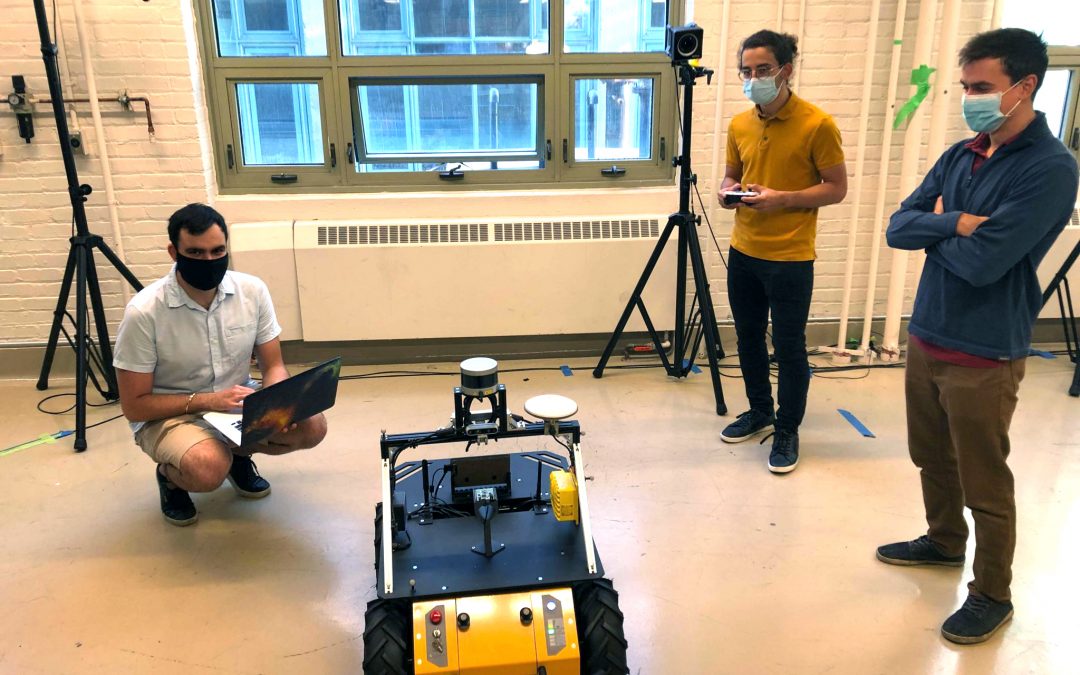 With the enormous boom and ever-expanding application of robotics and automation in all types of industries, it is becoming increasingly important to be able to not only communicate and control a robot but also to estimate its position and heading. In busy or low-signal environments, this can be challenging, especially when robot tasks rely on heading estimation to be completed. While there are currently many industry solutions to heading estimation, robotic systems are being pressed to improve on their current features with limited hardware or software. This is particularly relevant for researchers or business owners who are looking to adopt more cost-effective robot solutions that might have to perform the same processes as more expensive alternatives but often with fewer components.

With these types of challenges and limitations in mind, the Dynamics Estimation & Control of Aerospace & Robotic (DECAR) Systems Group as part of the Department of Mechanical Engineering at McGill University is using Husky UGV to develop a method to estimate the heading of an indoor robot only using hardware that is typically present for position estimation. 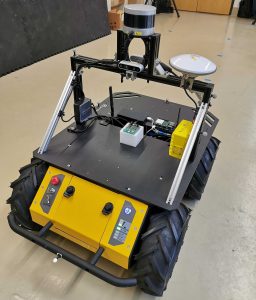 As a research group focused on conducting fundamental and applied research on navigation, guidance, and control of air, ground, marine, space, and manipulator robots, the DECAR Systems Group is interested in presenting further robotic solutions to heading estimation with comparable performance to alternative methods, all without requiring additional hardware.

A typical robot positioning approach is to use ultra-wideband (UWB) technology. In this approach, a UWB tag mounted on a robot is used to measure the distance to various stationary UWB anchors around the indoor space. Using these range measurements, it is possible to trilaterate the robot’s position to decimeter-level accuracy. Performance can be further improved by coupling the UWB position estimate with IMU data in a filtering framework.

In the DECAR Systems Group’s approach, they used a machine learning modeling tool called Gaussian Processes to learn a relationship between the robot heading and the strength of the signals that the UWB tag receives from the various anchors. As well, the learned relationship produced a heading estimate which could be coupled with IMU measurements in a filtering framework to improve performance.

The UWB tag in the team’s experiments was mounted on Husky UGV, which recorded the distance and received signal strength measurements from the various anchors as it drove around the room. A dataset was collected to train the Gaussian Process model and two additional datasets were collected to validate the overall approach performance. Although UWB is typically only used for positioning, the team’s work shows that it is possible to extract heading information by considering the radiation pattern of the antenna used on the UWB tag. This pattern is a function of the angle around the robot and affects the received signal strength (RSS) of the signals sent between the UWB anchors and the tag.

In order to conduct their research, the team made use of IMU and an ultra-wideband (UWB) setup involving a UWB tag mounted on Husky UGV and 5 stationary UWB anchors at various heights around the room. The combination of IMU and UWB distance measurements is typically used to provide position information about indoor robots. However, the approach taken by the DECAR Systems Group is to use the IMU, UWB distance, and UWB RSS to estimate position and heading of the robot.  A magnetometer also allowed them to compare their method to the more traditional magnetometer-based approach to heading estimation.

“Husky UGV was easy to set up for the needs of our experiments and provided us with the ability to quickly collect new datasets while minimizing the time required both in the lab and during data processing.” 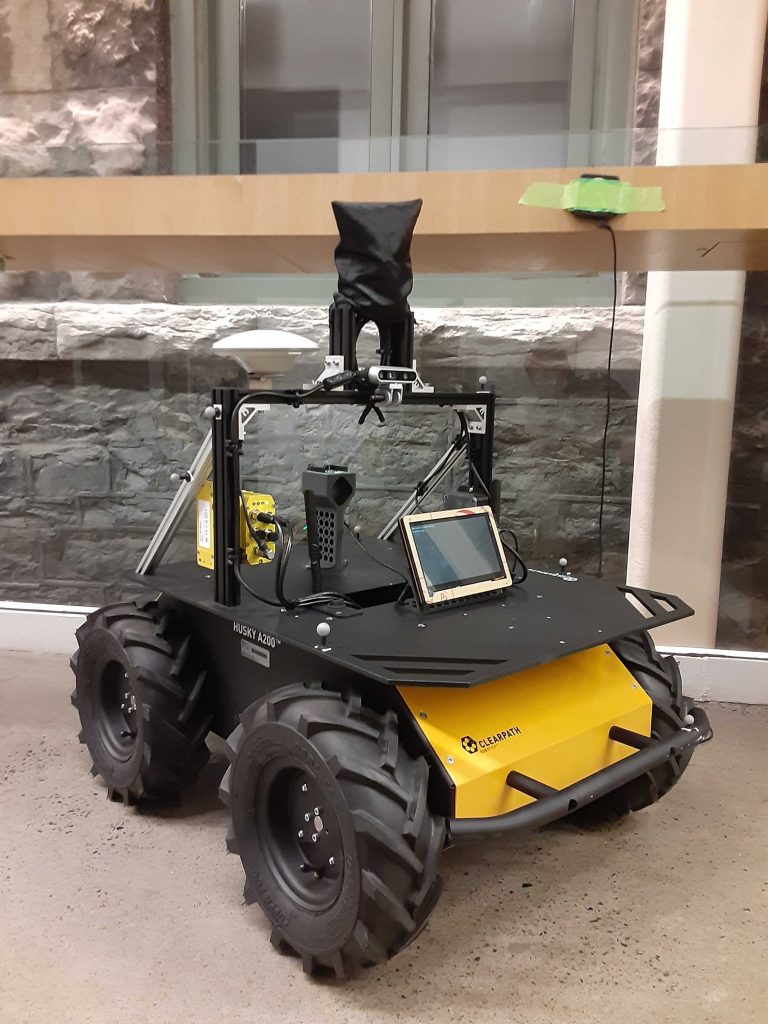 However, to test the approach proposed by the DECAR Systems Group, data must be collected in order to train and test the machine learning model. Specifically, to develop this learning model, the DECAR Systems Group chose Husky UGV in order to provide an easy way to set up and record data. They found the ability to interface with all the sensors at the same time through Husky UGV’s integrated ROS-enabled computer critical in reducing the amount of overhead work needed to collect and process the data.

Additionally, using Husky UGV allowed the team to validate their approach on a real indoor robot, proving that it could be applied to robotic systems currently in use around the world. The alternative to Husky UGV would have been collecting the data through hand-held implementation of the hardware. But naturally, manually collecting data can be a very time-consuming. Finally, real robotic systems frequently introduce unexpected errors and affect measurements in unexpected ways. As such, the team highly preferred to validate algorithms on actual robots to render them more robust.

The team also knew that their research would require constant changes and to interface with various sensors on the robotic platform to improve their own algorithms and software. Therefore, it was key for Husky UGV to be fully ROS-enabled, have solid computational resources for online algorithm execution, and have the ability to easily add on additional sensors as the team’s research requires them. Ultimately, this enabled the team to streamline important processes, such as data collection, and also work with a highly maneuverable robot like Husky UGV due to its differential drive capabilities to perform several different trajectories. As Daniil Lisus, M.Sc. Graduate Student at McGill University, said: “Husky UGV was easy to set up for the needs of our experiments and provided us with the ability to quickly collect new datasets while minimizing the time required both in the lab and during data processing.” 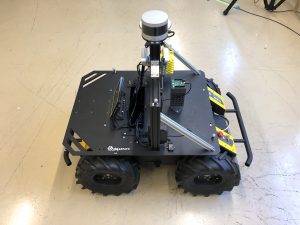 The team’s approach was able to showcase the ability to estimate the heading of an indoor robot only using hardware that is typically used for position estimation. The approach is experimentally shown to perform comparably to a common heading estimation technique that requires an additional sensor. As well, the project produced a publication in the IEEE Robotics and Automation Letters, which will also be presented at the International Conference on Intelligent Robots and Systems (IROS) 2021. You can read the full paper here.

To learn more about the DECAR Systems Group, you can visit their website here.

To learn more about Husky UGV, you can visit our website here.