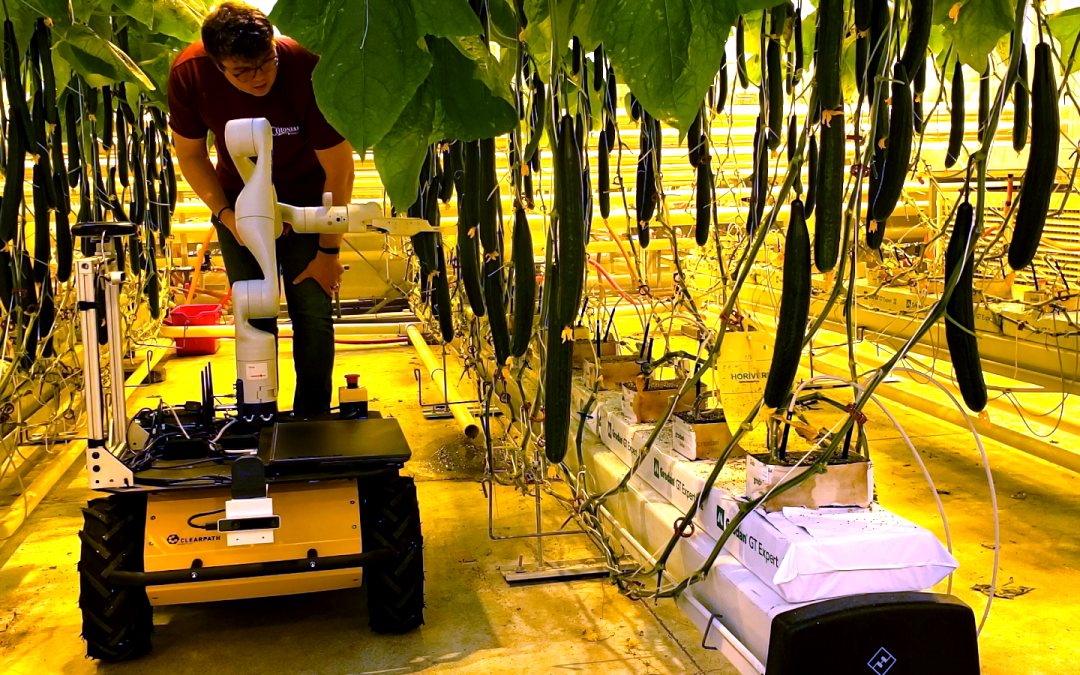 One of the largest concerns in a constantly growing agriculture industry is sustainability. With the population growth booming year after year, many believe that the controlled environments of indoor farming, such as greenhouses, are the energy-efficient solution to provide healthier and more varied crops all-year-round. To keep up, robotics researchers have been considering the application of autonomous platforms in such spaces to improve productivity and allow humans to focus on other critical tasks.

Vineland Research and Innovation Centre (Vineland), based in Lincoln, Canada, is exactly one of the organizations looking into boosting productivity in commercial greenhouses. Their main goal is to improve the economic viability, sustainability and competitiveness of horticulture in Canada, and they are looking to achieve this through a variety of solutions, including robotics. Led by Field Robotics Research Scientist Brian Lynch, Vineland is using Husky UGV to develop an autonomous robotic cucumber harvesting system for use in commercial greenhouse operations. Such an ambitious project would be crucial in reducing labour costs, as well as dependency on a diminishing workforce. In other words, this cucumber harvester could help the agriculture industry keep up with demand.

However, the interaction between a robotic platform and a given crop can be quite complex. For example, in this cucumber application, Husky UGV would have to detect the fruit, characterize its ripeness, and determine its spatial location within the facility. Then, it would have to safely and efficiently reach the fruit with the help of a robotic manipulator arm to harvest the fruit with its customized end-effector. All of this would have to be integrated onto a mobile robotic platform capable of traversing greenhouse infrastructure. So, how did Vineland tackle these challenges?

Well, their proposed solution started with using Husky UGV as a mobile platform for their robotic cucumber harvesting solution, ultimately enabling them to easily move around the greenhouse environment both manually and as part of the automated harvesting control system. Although the Vineland team does not currently use Husky UGV for driving fully autonomously, the main control loop uses vision to detect and harvest fruit, as well as maintain control over Husky UGV’s motion. The system also depends on the rough localization of the robot’s position based on its built-in wheel odometry sensing capability. 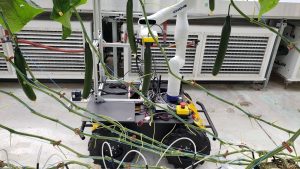 To accomplish the robot’s processes, their system uses an Intel RealSense D435 camera for the primary vision system as well as an Intel RealSense T265 mounted at the front bumper for providing visual odometry for fusion with wheel odometry. The set-up also includes additional cameras for recording experiments including a Vuze+ 3D 360 camera. A Kinova Gen3 manipulator arm is then integrated for carrying out robotics tasks, as well as a customized end-effector. Computing and networking are supported with a laptop computer and wireless router mounted on the top plate. Finally, all of these components are powered by Husky UGV’s power supply.

“The ease of integrating into our software architecture through ROS is by far the most important aspect. In addition, using the Husky’s performance specifications means we don’t have to worry about speed, torque, payload capacity, traversability, etc.”

Creating a system to allow all of these unique processes, however, required much testing. By quickly being able to integrate all the systems onto Husky UGV, the team was able to jump straight into testing the system and proving the concept in their smaller greenhouse compartments at Vineland, where they have concrete floors. In this testing phase, Vineland was able to take advantage of Husky UGV’s built-in wheel odometry to assist with localizing fruit and compensating for motion. This allowed the team to focus on developing a customized version of Husky UGV that will be able to travel on and off pipe rails in their larger greenhouse compartments and in commercial facilities.

An out-of-the-box ready solution like Husky UGV saved the team valuable time that would have otherwise been spent providing a proof-of-concept testing platform, customizing a platform for travelling on pipe rails, or designing, fabricating, and troubleshooting a customized system themselves.  As well, the integration of Vineland’s systems would have been more difficult as the time would have either been needed to develop their own ROS wrappers and/or drivers, or possibly re-design the system using a different software/communications framework. Ultimately, developing their own mobile robot from the ground up would have distracted them from solving the real challenges of harvesting fruit.

Husky UGV’s ease of integration with Vinelandd’s other sub-systems through ROS allowed for a very quick systems integration process. Easy access to the robot’s power supply was also important as it allowed the team to provide power to all of their robotics, vision, computing, and networking features. Ultimately then, Vineland chose Husky UGV because of the ease of integrating software through ROS and payloads on the top plate with accessible power supply connections.

As expected, the team was able to immediately connect to and control Husky UGV and the systems integration process was executed by their team rapidly. “The ease of integrating into our software architecture through ROS is by far the most important aspect,” said Research Scientist, Brian Lynch. “In addition, using the Husky’s performance specifications means we don’t have to worry about speed, torque, payload capacity, traversability, etc. Furthermore, the ease of mechanical and electrical integration is an important aspect. Some minor but also important aspects are the simplicity of swapping batteries, mounting and dismounting the top plate, reliable built-in wheel odometry, and support and legacy through many other example use cases.” 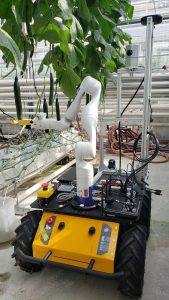 Bringing it to Market

Together with Husky UGV, Vineland was able to take advantage of an established and reliable robotic platform, as well as most effectively customizing a system for their project needs. To date, they have achieved excellent performance with the overall harvesting solution, reaching close to a 90% success rate at 14 seconds per fruit. Development and testing have so far taken place in Vineland’s experimental greenhouse facility where rows of cucumbers are grown in a compartment with concrete flooring, which allows easy use of Husky UGV.

Vineland is excited for what the future holds for their Husky UGV cucumber harvester project. They hope to demonstrate the system working in a commercial facility and collaborate with a partner to license and commercialize the solution so that it can be developed further into a product and become available to growers. As well, they hope to develop a customized version of Husky UGV that can travel on rails and pursue publications this year that will showcase their use of the robot.

To learn more about Vineland, visit their website here.