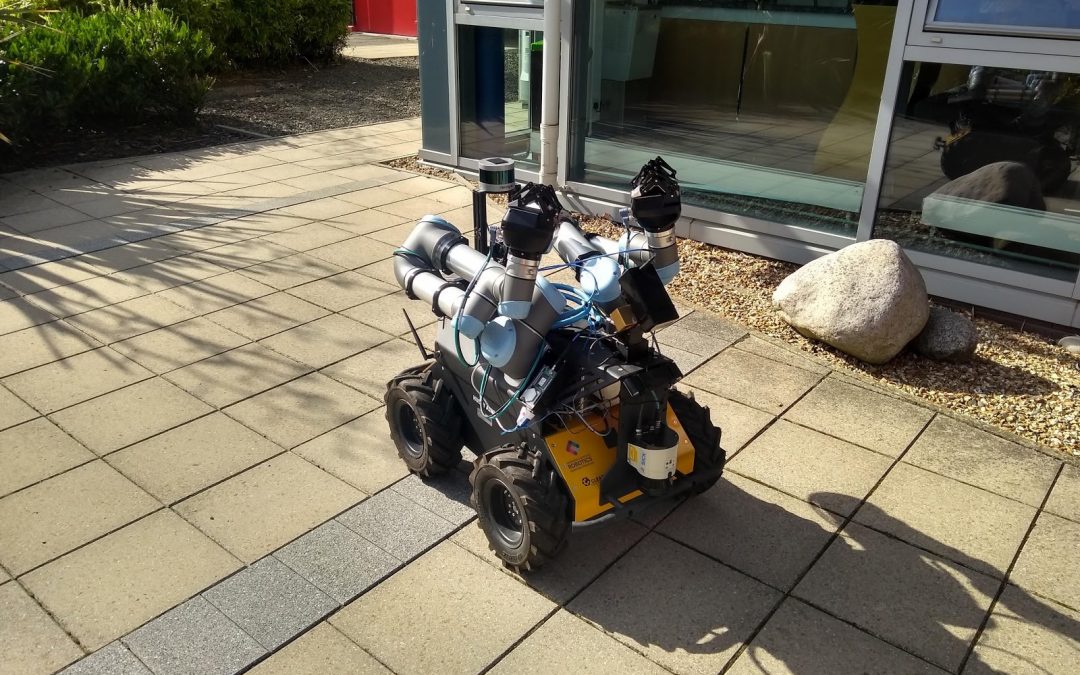 The growing need for critical infrastructure and technology as a service has fuelled a global demand for smart systems across all sectors of industry. Organizations are looking to augment their workforce with tools to increase productivity, efficiency, and create safer workplaces through analysis and removing people from hazardous situations.

The Smart Systems Group from the Heriot-Watt University in Edinburgh is working to promote sustainability and to create resilience in systems, organizations, networks, and societies. Their projects include collaboration with a global network of academic and industrial partners to deliver the flexibility, resilience, and sustainability that our global infrastructure requires. The work was completed in collaboration with the Offshore Robotics for the Certification of Assets (ORCA) Hub, MicroSense Technologies Ltd, and Offshore Renewable Energy Catapult. The cluster of this work was driven by the commercial needs of the offshore energy sector. 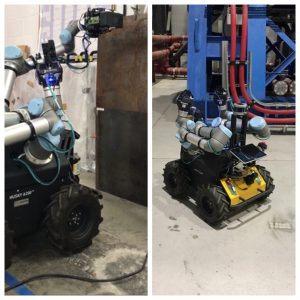 FMCW Radar inspection paired with two UR5 manipulators completing raster scan for detection of corrosion (left), FMCW deployed on autonomous confined space inspection mission on the pan-tilt unit at the front at the OREC facility (right).

The team’s project, titled “Symbiotic System Design for Safe and Resilient Autonomous Robotics” is utilizing Husky UGV to create resilient and safe autonomous services for the offshore energy sector. To do this, the Smart Systems Group designed a “Symbiotic Digital Architecture” (SDA) that connected people, infrastructure, the environment, and robotics into a hyper-enabled collaborative environment. Their project addressed three key functions:

But as is natural in the world of research and development, such an ambitious project had several considerations regarding past innovation and the goals that the team was looking to meet. To begin, they had to establish how to couple human knowledge and experience into a collaborative partnership with autonomous systems, while also monitoring a dynamic range of variables across factors such as environmental conditions, human interaction, robotic platform reliability, and dynamic safety cases.

Next, to improve “foresight” to changes in the mission environment, the team created a patented radar technology for the detection of obstacles outside of the mission space (e.g. people behind walls approaching a point of room entry during run-time autonomous inspections). To support such functions, they also created a sensor that could detect people and objects in opaque environments. Finally, for asset integrity inspection within a confined space, the team used radar technology and AI analysis.

The use of an out-of-the-box robotic platform like Husky UGV allowed the team to test and develop many core features of their project. The Symbiotic Digital Architecture (SDA) supports the integration of distributed systems and human-in-the-loop observers, to demonstrate augmented run-time operational reliability and safety compliance.

The design of their SDA incorporates the complex mission variables across environmental conditions, safety cases, mission objectives, robotic platform state of health, infrastructure requirements, and remote human observer queries. It enables near to real-time and bidirectional communication and information exchange across all mission assets. Through these design features, the system has the potential to incorporate 1000 different assets e.g. sensors, actuators, robots, etc!

Husky UGV also enabled the SDA and its applications: 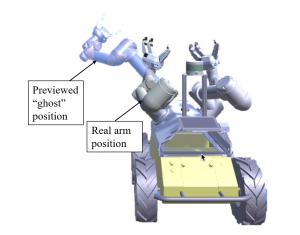 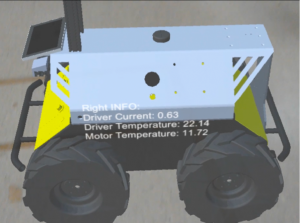 Husky UGV provided a compatible interoperable platform that supported the team’s technology-agnostic approach to the design, implementation, and evaluation of our SDA. Its highly customizable architecture supported the integration of their novel safety and asset integrity sensing technology – FMCW radar. Ultimately then, Husky UGV allowed the team to create a case study to show that their symbiotic system and self-certification framework are platform agnostic.

The main functions of this team’s project included the collective goal of asset integrity inspection in the challenging offshore environment analogue utilized for their demonstration. In addition to core mission waypoints and objectives, the team introduced three major system issues to simulate changes in the operating environment, resulting in the need for the robotic platform to continually reassess the mission and system status; to evaluate the core objective of returning safely to the base station.

In doing so, the team demonstrated an ‘adapt and survive’ scenario, where the dynamic conditions imposed on the mobile robotic platform created the need for the onboard AI-assisted decision-making core to generate a continuously updating system. This reliability control system would be capable of ensuring that the robotic asset can accomplish processes such as identifying barriers to the success of the mission using integrated sensing or offering solutions to the computational decision-making elements, represented by both the AI and/or the human-in-the-loop operator.

The successful integration of the symbiotic system elements ensures that the robotic platform is always capable of completing its mission under optimal conditions or remains capable of assessing when the platform should replan and return to base when conditions become less favorable. At the core of this work is the need for the robotic platform to demonstrate resilience while operating autonomously and entirely within the envelope of safety compliance. Husky UGV can operate in a wide range of environmental conditions, increasing the uptime of the system.

“The platform provides a scalable and modular architecture to readily customize the robotic platform to a range of mission requirements. Using such a robust off-the-shelf system allowed us to demonstrate to decision-makers the significant advancements our research had made on the challenges of run-time safety compliance and reliability of robotic platforms.”

To get this project up and running, the Husky UGV was equipped with a pair of UR-5 manipulators, a 16 beam Velodyne 3D LIDAR and a low-mounted SICK 2D LIDAR sensor. For asset integrity inspection and to support navigation in opaque conditions, they equipped a FMCW radar. Furthermore, they installed run-time reliability ontology onboard the platform and utilized a Microsoft HoloLens for augmented reality diagnosis of faults with access to the digital twin.

Without the Clearpath robotic development platform, however, the Smart Systems Group would have been forced to create a robotic platform from scratch or purchase another type of robotic platform which may not have the mechanical and software components they required. The former approach, though, would be costly and time-consuming.

Instead, by using a tried and tested platform, the team could get straight into creating and developing further solutions, ultimately ensuring that their research efforts are strategically applied to key areas for advancement. The latter approach may have created potential difficulty in mounting their sensors and deploying their system in a wide range of scenarios.

The team chose Husky UGV as it simplified the integration of sensors, allowing the team to focus on developing their symbiotic system software. As well, Professor David Flynn spoke about its easy-to-use utility:  “The platform provides a scalable and modular architecture to readily customize the robotic platform to a range of mission requirements. Using such a robust off-the-shelf system allowed us to demonstrate to decision-makers the significant advancements our research had made on the challenges of run-time safety compliance and reliability of robotic platforms.”

As well, the team found Husky UGV to be particularly suited for teaching and for advanced students such as mechanical engineering or Masters students and as a proof of concepts platform since the platform is ROS based and can traverse a wide range of terrains. 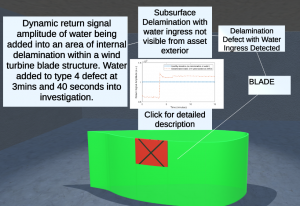 Creating Designs for the Future

A symbiotic system reflects the lifecycle learning and co-evolution with knowledge sharing for the mutual gain of robotic platforms and remote human operators. This enables run-time verification of safety, reliability, and resilience during autonomous missions.

The Smart Systems Group at Heriot-Watt University demonstrated their system at tier 1- ‘Adapt and Survive’; where an autonomous mission or service has predefined mission objectives. The “adapt and survive” control system can forecast and automatically mitigate against known and unknown risks in the mission environment. This capability is transformative in terms of run-time safety compliance and mission resilience. For example, if there were an emergent fault within Husky UGV, the system would automatically re-optimize the mission to ensure optimal outcomes that never violated safety rules. Alternatively, if someone entered the mission space or was actually located in the mission space, the SDA would reprioritize the mission to ensure the safety of or recovery of the individual.

To summarize then, the system can achieve the following:

In a future demonstration showcase the team’s plans to utilize a second robotic platform for a collaborative autonomous mission where the robotic platforms autonomously support each other. The value created from the symbiotic system framework will apply to host bidirectional data exchange and advance the goal of servitization, further advancing the roadmap to trusted autonomy and safety compliance in the offshore environment.

Ultimately, the team is quite happy with the success of their project. They have proven the seamless integration of an improved dashboard for beyond visual line of sight operation of autonomous systems due to the links between the human-in-the-loop, digital twin, run-time reliability ontology, and robotic platform. 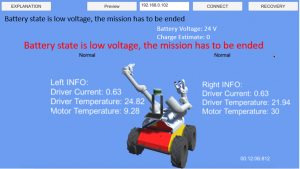 The team is also hoping to garner some recognition for the project as they’ve submitted their symbiotic system demonstration summary video for the IEEE Access Best Video Award. As well, they had hoped to submit their Self-Repairing Cities- Robots for Resilient Infrastructure, ORCA Hub news article, and accompanying video footage to the Leeds Robotic Competition, but unfortunately it was canceled due to COVID-19.

If you are interested in reading more about the project, you can check-out the Smart Systems Group’s following publications:

To learn more about Husky UGV, visit our website.