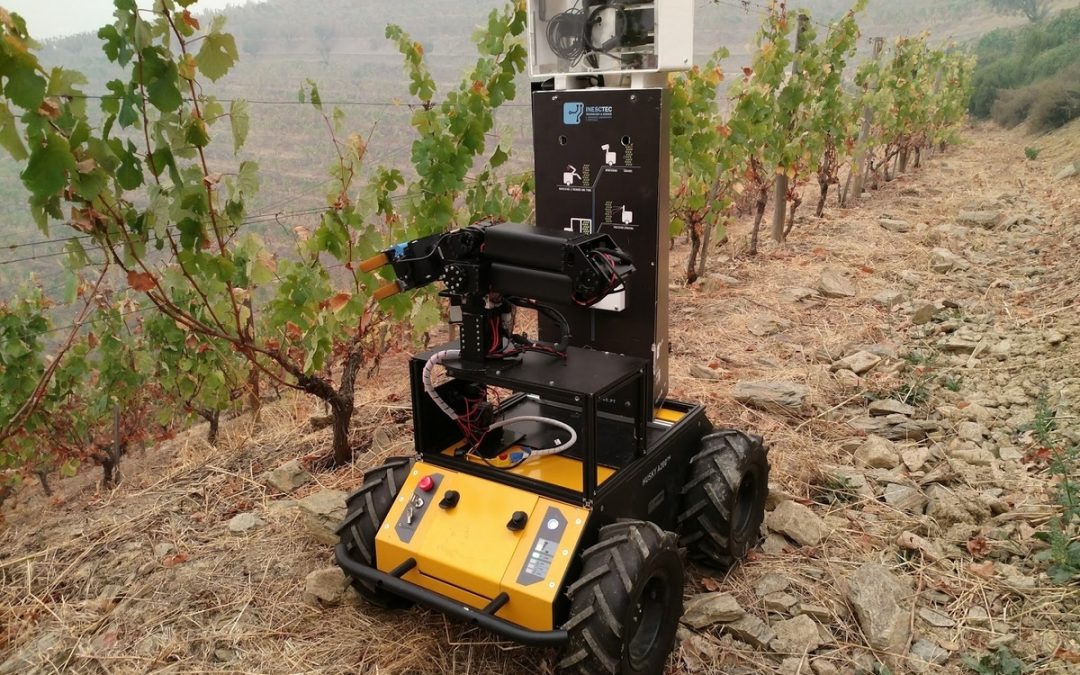 The world’s population is growing at a remarkable pace. It is estimated that by 2050, the world and its food production will have to support over 9 billion people! For such a future to be sustainable, the current worldwide food production would have to double. But, how is the agriculture industry supposed to respond to such dramatic change when we’re rapidly eating up all the arable land?

A team from the Laboratory of Robotics and IoT for Smart Precision Agriculture and Forestry at INESC TEC – Technology and Science are creating a ROS stack solution using Husky UGV for precision field crop agriculture to combat this issue. The Institute for Systems and Computer Engineering, Technology and Science is a research & development institute at the University of Porto in Portugal, which functions as an interface between the academic world and the world of industry and serves public administration. The team’s agricultural robotics lab works to develop robotics, automation, and IoT based solutions that improve the levels of smart precision (“right time, right amount, right place”) agriculture and forestry, profitability, and automation in three main environments:

While the agriculture industry has already made efforts to include robotic automation for many of its processes, several environments, and techniques, such as the cultivation of vine and olive groves in mountain areas or steep slopes still present significant challenges for mechanization due to difficult orographic conditions, extreme fragmentation of the vineyards, difficult climate conditions, large biodiversity, and more. To keep up with such growing demand though, farmers are looking for cost-effective, safe, and autonomous precision spraying/mowing robots capable of working in steep slope vineyards to decrease costs, increase efficiency, and reduce the environmental damage caused by the agriculture industry. 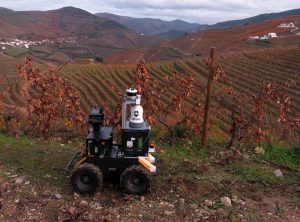 Thus, the Husky UGV based AgRobIT project proposes a simplified architecture based on a ROS stack solution consisting of three main ROS packages: localization and mapping, path planning and control, and mission supervisor. AgRobIT has been able to leverage INESCTEC’s key developments over the past four years including VineSLAM (a cost-effective, modular and reliable localization system capable of working with/without GNSS available and consider semantic information), and AgRobPP (path planning and control systems which are aware of soil compaction and the robot’s center of gravity). However, the code of both VineSLAM and AgRobPP is closed source and the team wants to create support documents to make it open source for the general community.

Therefore, AgRobIT proposes an open-source ROS stack with advanced agricultural path planning and localization ROS packages considering steep slope viticulture constraints and which is interoperable with common standards of agricultural decision support systems. The team believes that the AgRobIT stack will be a key enabling technology for the development of cost-effective mowing robots.

AgRobIT in action in the grove

To feed their ROS software stack, the team included a 3D LIDAR for localisation in agricultural terrains by laser odometry as the environment is highly unstructured, a stereo Camera for localisation using natural features (i.e. vine trunks), an IMU (redundant sensor), and a GNSS receptor (redundant sensor for localisation when available). To add manipulation (harvesting and pruning) capabilities the team integrated a Dynamixel Pro Robot Arm (Manipulator-H) from ROBOTIS with aUSB-485 adaptor connected to an independent processing unit. This system has its own battery and communicates with the remaining systems by Ethernet. On the ROS level, they developed a driver node to subscribe to the joint position target and publish each joint state. On top of that, they also added their own joint controller and path planner ROS node which was benchmarked against other MoveIt solutions. Using their own software and onboard hardware, the platform was tested in monitoring, spraying, harvesting, mowing, and pruning tasks in vineyards.

“We chose the Husky UGV because it is ROS compatible, modular, and has a relevant payload and traction capacity for our R&D works.”

The Husky UGV platform has been a crucial aid for the robotics lab in testing their concepts in various agricultural scenarios to fine-tune their own code. It allowed them to focus more of their time and resources on creating their ROS stack instead of also having to conceptualize a robotic platform from scratch. The team chose a Clearpath solution due to its wide variety of ROS-supported software and proven success in the field of outdoor robots. Ultimately, the team chose Husky UGV because of its robustness, simplicity, and modular nature, as well as, most importantly, its ROS compatibility. As Filipe Neves dos Santos, Senior Researcher for Agricultural and Forestry Robotics and IoT at the  Centre for Robotics and Intelligent Systems stated: “We choose the Husky UGV because it is ROS compatible, modular, and has a relevant payload and traction capacity for our R&D works.” 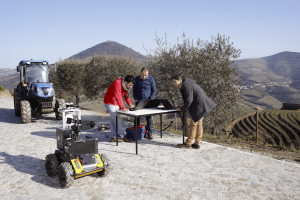 But the work certainly isn’t over. The AgRobIT team plans to launch a fully functional stack working with ROS 2.0 for autonomous navigation and reliable to GNSS fails/absence in agricultural scenarios, such as vineyards and olive grooves. In the years to come, they will fine-tune their research with further testing and continue to publish their findings to help the agriculture industry adjust to technological advancements through key industry partnerships.

If you are interested in reading more of AgRobIT’s research and past projects you can find them here:

To learn more about the Husky UGV, visit our website here.