Norlab Pushes Autonomous Navigation Beyond Its Limits with Warthog UGV 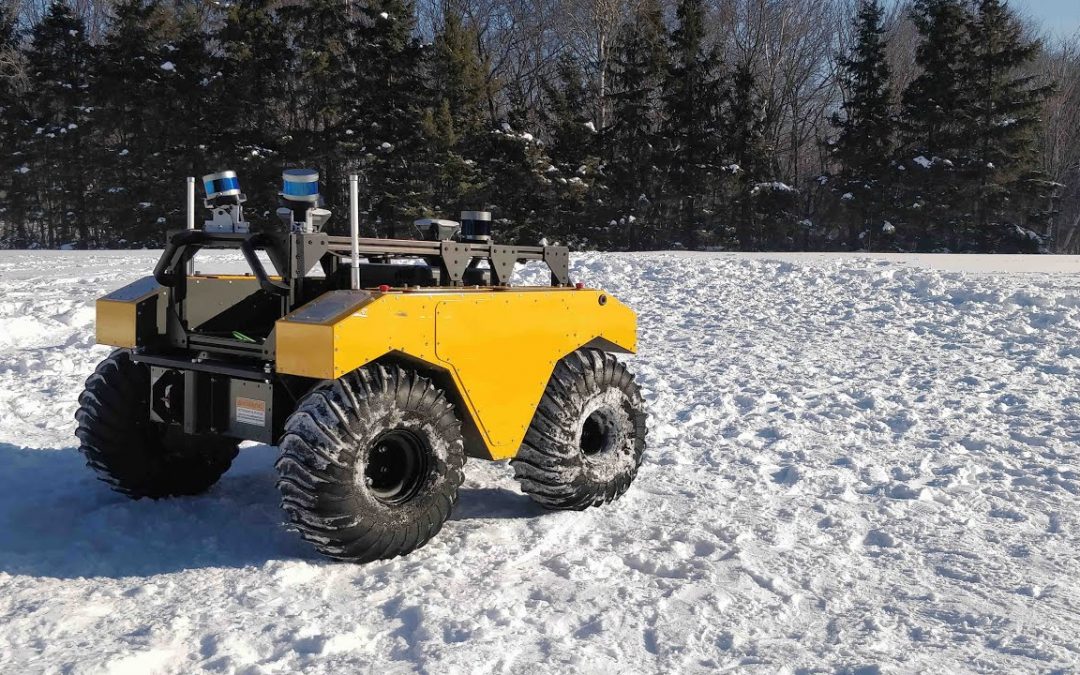 Canadians know first-hand the brutal nature of winters. The weather and terrain can be unforgiving and hazardous when one ventures northwards during the chilly months. And yet, research and exploration are constantly taking on the challenges of northern conditions. A dedicated team from Northern Robotics Laboratory (Norlab) at Laval University in Quebec is pushing robotic navigation to its absolute limits: autonomous navigation for snow!

By developing and exploring navigation algorithms, Norlab is focused on creating a robust mobile robot that can quickly adapt to a variety of real-life weather and terrain conditions. Specifically, they are developing localization algorithms for laser sensors (lidar) and 3D reconstruction of environments in situations where such tools can often struggle. The arena for these tests? Over 400 km2 of the Montmorency forest north of Quebec City which is covered in snow for 6 months of the year! 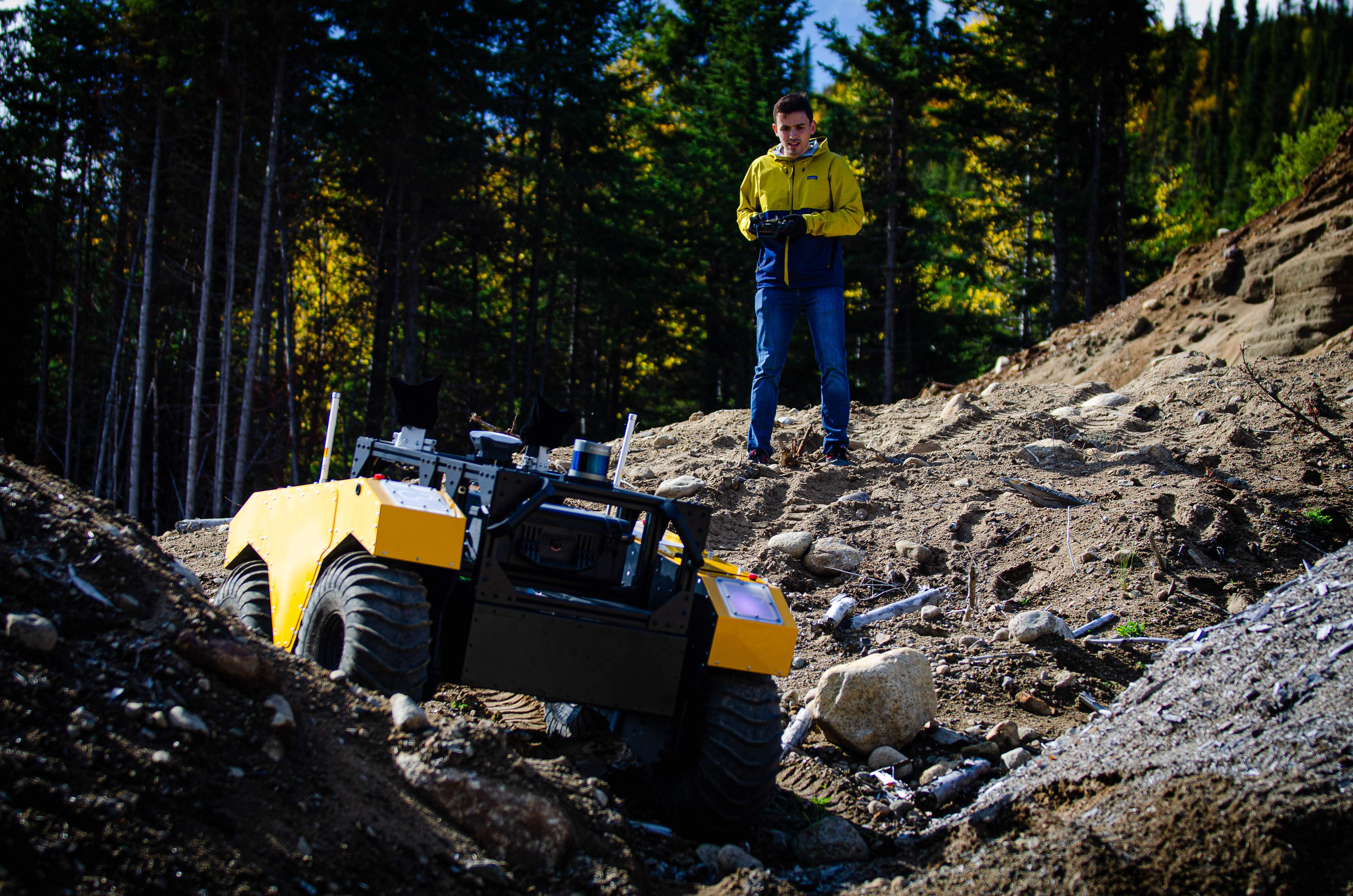 How to Not Get Lost in the Woods

Their project, entitled SNOW (Self-driving Navigation Optimized for Winter) aims to innovate current technology to improve autonomous driving in environments that are often rendered unstructured and dynamic due to winter conditions such as snow coverage and ice. Furthermore, they are leveraging a partnership with General Dynamics Land Systems – Canada (GDLS-C) to ground themselves in real-world applications. This type of technology is integral for a variety of current applications including autonomous refueling and navigation, search and rescue missions, Canadian Arctic Sovereignty, freight transport on Northern ice roads, and much more. And this is where Warthog UGV comes in! 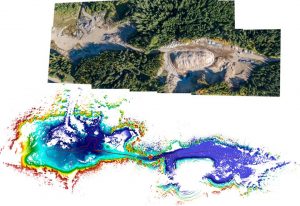 Using Warthog UGV,  one of Clearpath’s largest all-terrain platforms, the Norlab team creates maps that allow Warthog to adapt to environmental changes caused by snow and winds, while also allowing a robust localization of the vehicle in real-time. These maps will also serve as the foundation for novel path planning algorithms handling deformable obstacles and environments (e.g., deep snow under a vehicle).

But what is making the project tick? Norlab equipped the Warthog with one 32 beam Robosense RS-32 lidar, as well as two 16 beam Robosense RS-16 lidars. An Iterative Closest Point (ICP) algorithm takes the laser scans from these sensors to localize the robot and map the environment. Additionally, a Xsens Mti-10 IMU is used with the wheel odometry of the platform to help localize the robot. GNSS localization is then facilitated by two Emlid GNSS antennas while an array of three Trimble theodolite prisms and total stations provide ground truth localization of the UGV. Finally, an embedded computer was also added to compute the high-level algorithms required for autonomous navigation. 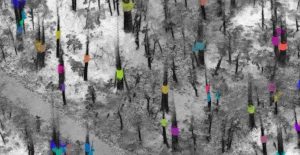 “Warthog is a great research platform because of the ease of integration with various sensors. It is also a very mobile platform, which is perfect for our project, which aims to push the limits of what is accessible by autonomous mobile robots.” – Dr. François Pomerleau

Such ambitious goals are not without their challenges though. Snowfall and unpredictable environments make localization and mapping more difficult. Furthermore, an autonomous robot must be able to navigate and overcome snow and ice obstacles which are standard for winter. Warthog UGV helped bypass some of these initial problems. Due to its easy start-up with simplified integration and ROS-ready capabilities, the Norlab team was able to focus on other aspects of their research as well as publish their work to great success.

As well, by not having to build a platform from the ground up, Norlab could chart out a more ambitious timeline and allocate their time appropriately. Furthermore, Warthog’s size, traction, and low ground pressure allow it to tackle difficult terrains where other robots would fail. Norlab has also modified their Warthog with tracks in order to lift the robot above deep snow. By enabling navigation in such extreme environments, Norlab is able to develop complex and advanced localization algorithms. As the team lead, Dr. François Pomerleau, believes: “the Warthog is a great research platform because of the ease of integration with various sensors. It is also a very mobile platform, which is perfect for our project, which aims to push the limits of what is accessible by autonomous mobile robots.” 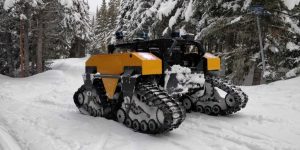 Warthog powering through ice and snow

As mentioned above, Norlab can also point to impressive accomplishments with their research findings. Their work was published in a Journal of Field Robotics paper proposing point cloud-based radio propagation models for differential GNSS as well as at the Conference on Computer and Robot Vision (CRV) 2020  article evaluating various kinematic models for skid-steering mobile robots in subarctic environments. This same CRV article even won the Best Robot Vision Paper at this conference! Their work is not finished though as they are constantly looking to improve their own work, send the robot into more extreme conditions, and publish their findings to push innovation further.

If you want to keep up with the SNOW project, the Norlab Youtube channel has a weekly mobility test playlist including many deployments of the Warthog!

You can learn more about the Warthog UGV here.

Read more about Norlab’s work on their website here.