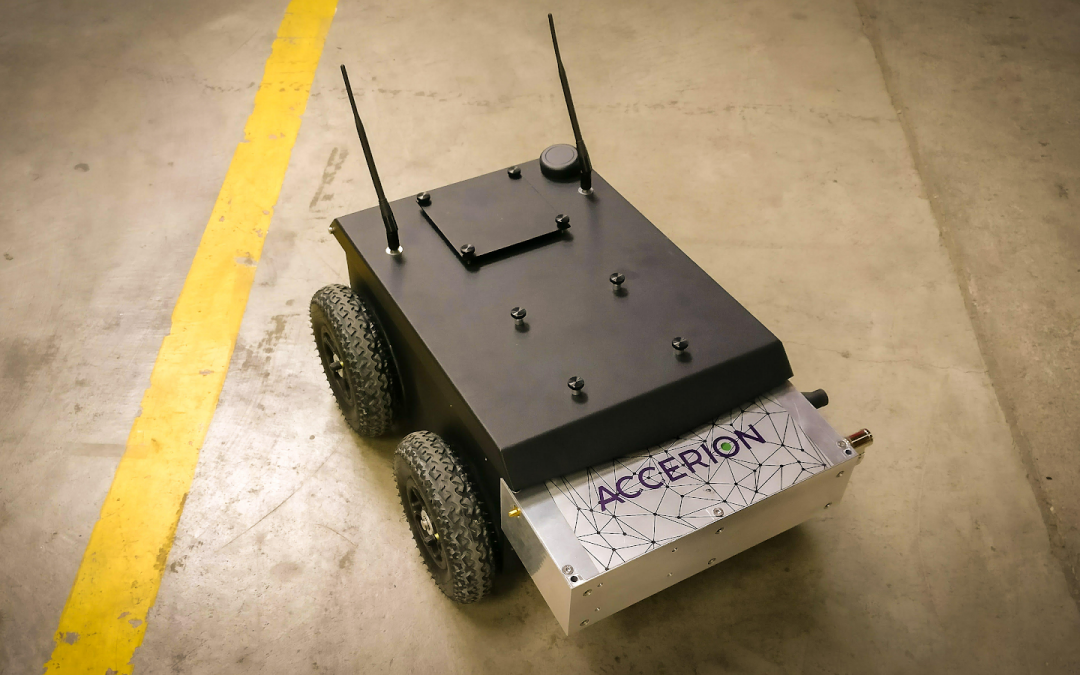 In the logistics industry, automated guided vehicles (AGVs) roam factory floors delivering parts from one station to another. Large robots and AGVs can carry a wide variety of objects, but they generally lack high-precision positioning.

For example, an AGV typically uses wheel-encoded data—basically counting how many times the wheels turn—to determine where it has driven and thus find its position. The problem is that if the wheels slip and continue to turn while the robot is not actually moving (a common occurrence, especially for skid-steering mobile robots like the Jackal), the position data becomes increasingly inaccurate.

If wheel slippage occurs while the robot is placing a delicate part on a conveyor belt, for instance, that low accuracy could result in the part accidentally being placed too close to the side of the belt, slipping off, and breaking.

Accerion’s approach to mobile robot positioning delivers submillimeter-level accuracy and high speeds without the need for any special infrastructure, thanks to optical sensors that scan the floor surface while the robot drives. Accerion offers two models of sensor: Jupiter, an all-in-one positioning system, and Triton, a smaller unit that serves as an add-on to existing systems.

“In both cases, we take camera images of the existing floor and match them with a model of the environment to determine the robot’s position,” said Vincent Burg, Accerion’s managing director. “Since we look directly at the floor, we measure pure displacement. This lets you steer something like the Jackal with much greater accuracy.” 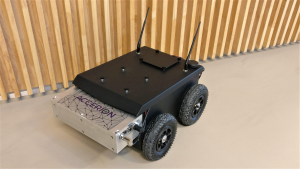 Another view of the Jupiter sensor on a Jackal. A simple two-cable connection lets the Jupiter integrate into any system.

While building the Jupiter and Triton sensors, Accerion developed an innovative virtual line-following method for getting robots to navigate along a path. Because Jupiter- and Triton-equipped robots can track the floor directly, they can follow “virtual lines” instead of requiring lines to be physically painted on the floor.

This project was done in partnership with Ruvu (http://ruvu.nl), which wrote the application and created the user interface, while Accerion provided the sensors.

The technology is new to the market, but one large customer in the U.S. is already using it for a packaging application with Jackal robots. 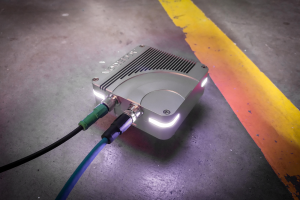 Add the Triton sensor to an existing positioning system for precise absolute positioning.

“We were relieved to find the Jackal had everything we needed, because otherwise we would have had to build our own UGV. This saved us a lot of time.” – Vincent Burg, Managing Director, Accerion

Why Accerion Chose to Build on Jackal UGV

Accerion needed a mobile robot for both development and demonstration, because they planned to build and test their products on the robot, then show off the performance to customers.

It had to be easy to program and extremely reliable so they could bring it to trade shows and run all the tests they needed. “Clearpath was the obvious winner,” said Burg, “especially given its open-source software and great technical support. In fact, it turned out even better than we expected, because our Jackal is still going strong despite operating daily in our labs for the past four years.

In conclusion, he said, “We were relieved to find the Jackal had everything we needed, because otherwise we would have had to build our own UGV. This saved us a lot of time.”

Where to See Accerion’s Sensors in Action

The Triton sensor was set to debut at LogiMAT … but unfortunately, like so many other events, it was cancelled due to the COVID-19 pandemic. Assuming things are back to normal in 2021, you’ll find Accerion there; they’ve already signed up for next year.

In the meantime, Triton is being shipped out to early customers, some of whom already have it up and running. Head over to Accerion’s website or watch the video below to learn more.