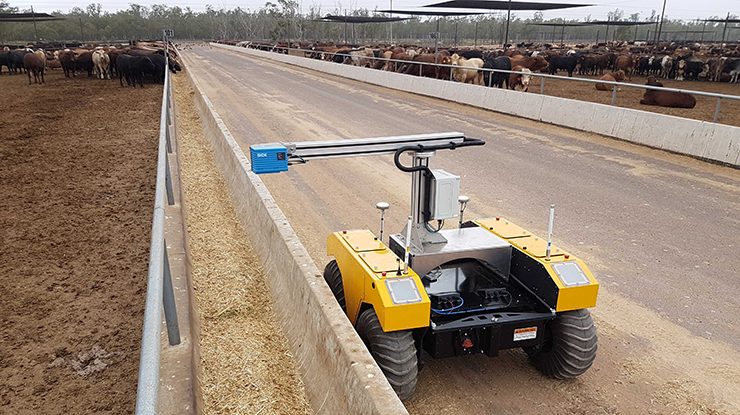 Australian robotics company Manabotix, founded in 2016, engineers bespoke solutions to assist clients with improved safe productivity for agriculture, mining, and shipping. One of their most innovative products is BunkBot, a robot based on Warthog UGV (unmanned ground vehicle) which autonomously scans livestock feed bunks for accurate and precise measurements of how much feed the penned animals have consumed.

How BunkBot Solves the Problem of Bunk Management

In the agriculture industry, bunk reading is a critical part of effective livestock growing. This task involves visually assessing how much feed is left in each feed bunk to determine feed consumption, which is a significant input to allocations. However, this task takes a dedicated resource a long time – (especially at large sites where the feed bunks are far apart from each other -) and a lot of skill and focus. That’s where Manabotix comes in. BunkBot is the world’s first robot capable of accurately and repeatedly assessing the feed remaining in feedlot bunks. In fact, it performs better than human feed callers at monitoring animal feed levels.

BunkBot stands to benefit lot feeders in several ways: by providing greater insight into cattle feed intake, by enabling more informed decisions regarding effective feed allocation, and by facilitating the reallocation of skilled personnel to attend to other operational priorities. 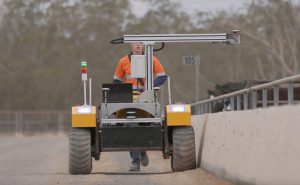 Development of BunkBot within a feedlot environment.

BunkBot was made by combining patented technology, Bunk Scanner, with Clearpath Robotics’ rugged Warthog robot base. Several sensors are employed to read the bunks and measure feed remaining, leading to a greater understanding of how much feed has been consumed. The solution also features GNSS for navigating routes around the feedlots, as well as LiDAR for avoiding collisions.

“Thanks to its high payload, rugged design, and ROS compatibility, the Warthog UGV is the perfect mobile base for our BunkBot.” – Dr Stuart McCarthy, Founder, Manabotix

The terrain around feedlots is often muddy and uneven, and adverse weather is occasionally experienced, so Manabotix needed a robust robot that could navigate in poor conditions and take a beating. They found it with Warthog. As Manabotix founder Dr Stuart McCarthy explained, “Thanks to its high payload, rugged design, and ROS compatibility, the Warthog UGV is the perfect mobile base for our BunkBot.”

Warthog’s compatibility with ROS was important because it meant that the team was easily able to integrate GNSS and work with the robot. There were other benefits, too. Warthog was very accessible compared to the other options they considered. In other words, as an off-the-shelf platform, Warthog allowed the team to save time and get to market faster. 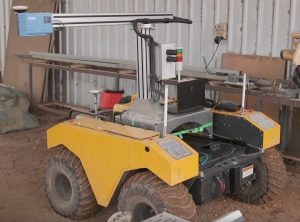 BunkBot parked and recharging after a day’s work.

Where to see BunkBot in Action

The Manabotix team was recently at the Cattle Industry Convention & NCBA Trade Show in San Antonio, Texas. They are preparing several exciting in-field demonstrations, locally in Queensland, Australia, as well as further afield, where lot feeders will be able to see first-hand how the system works in a feedlot operation. Manabotix is also currently investigating other potential applications for BunkBot.