Developing a Universal Algorithm for Mobile Robots with Husky UGV 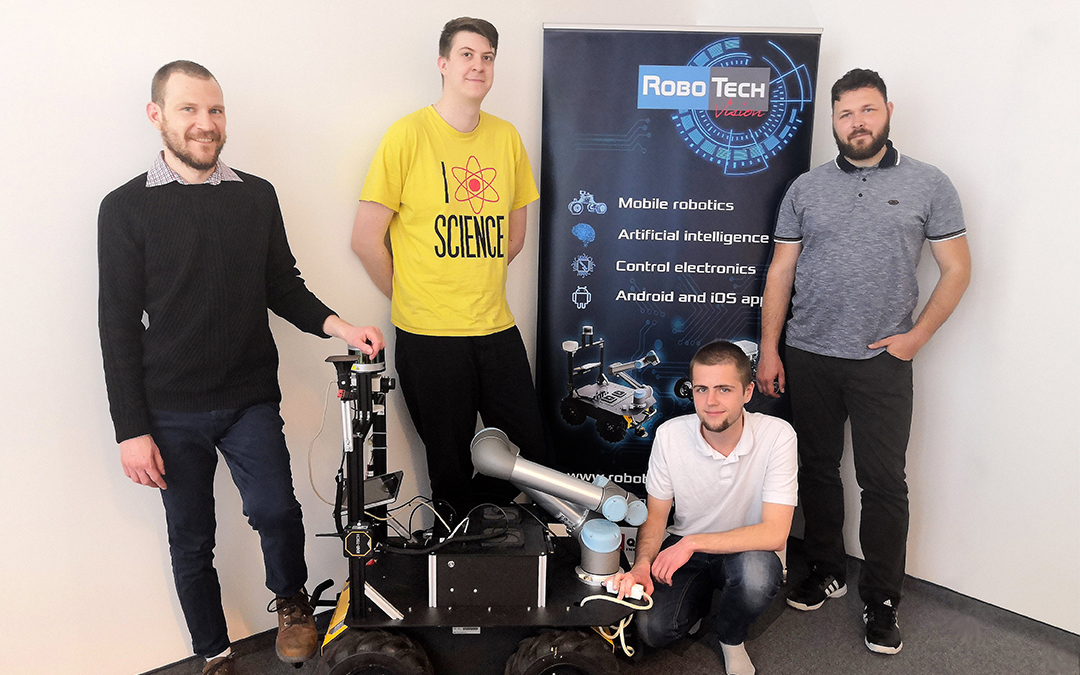 The Search for a Universal Algorithm

For robots to keep up with the pace of technological innovation, machine learning has become paramount. While robots are already effective at alleviating the manual operation of routine tasks, an intelligent robot should also be able to process their commands with future actions in mind. Engineers at RoboTech Vision Ltd., Peter Pásztó, PhD., Marian Kľúčik, and Martin Smoľák are focused on that pursuit by developing autonomous mobile robots for outdoor environments. This is where Clearpath’s Husky UGV, a medium sized robotic development platform, fits in.

What was RoboTech Vision’s goal with this technology collaboration? They wanted to utilize the Husky to debug their location and navigation algorithms. This step would enable them to effectively develop and deploy artificial intelligence on their own mobile robots. Furthermore, they are focused on using Husky for their research on robot learning, voice commanding, and object recognition. Clearpath not only provided a mobile base for their process but also served as a catalyst for their ROS experiences, particularly in the advances of their own algorithms and software resources.

RoboTech Vision’s unique approach is implementing the elements of artificial intelligence in addition to autonomous navigation. They believe that this provides better interaction with the user, prediction, and decision making in some situations. The objective is a robot that can understand verbal commands, learn and create logical links to the objects with commands, and use it to perform tasks.

Before adopting Husky, RoboTech Vision found that developing their own solution had been overly time-consuming. Clearpath’s robotics platform gave them the freedom to divide their team into two parts: 1) Development of algorithms (using Husky) and 2) Development of their own robot, Androver 2. The Androver 2 is a prototype of a four-wheeled mobile robot with a Double-Ackerman kinematic structure, designed primarily for outdoor environments. The versatile and customizable robot uses artificial intelligence for autonomous navigation and performs many different types of tasks. For example, Androver 2 has undergone successful day and night tests at the European Space Agency on the simulated surface of the Moon for their simulated space missions. 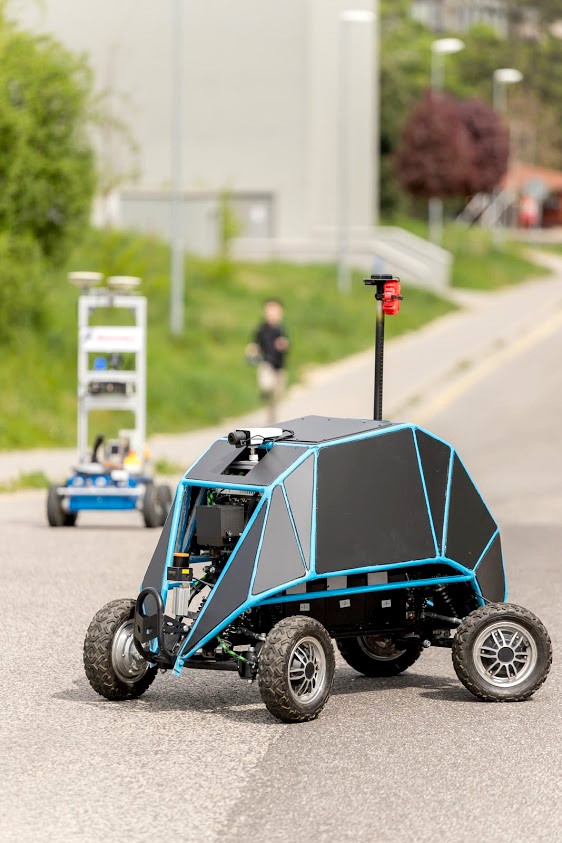 Androver 2 at the international competition Istrobot where it won first place. Its task was to move to a specified point as quickly as possible and return to the start.

RoboTech Vision’s main motivator for working with Clearpath was that Husky had a different kinematic structure than their own platform, Androver 2. This made it ideal for testing their algorithms on different models during development.  The main goal: a universal algorithm that can work on a variety of robots. By adopting the Husky robotic platform, they were able to save time as they did not have to independently develop their own platform for testing and developing their algorithms.

For mapping purposes, RoboTech Vision uses a LiDAR Velodyne Puck. The Velodyne with the Axis camera allows them to both detect obstacles and recognize objects. Their 2D Hokuyo UST-10LX LiDAR is mostly used for area monitoring, as they rely on a 3D scanner to detect obstacles. Finally, the UR5 robotic arm integrated by Clearpath will enable the robot to grasp recognized objects in the future.

Here is an example of RoboTech Vision using their Object Tracking Algorithm with Husky. It is able to recognize and follow objects at a safe distance using a camera with a 3D scanner.

According to RoboTech Vision, the Husky was effective at helping them progress towards their goal of creating a universal algorithm which would assist with their autonomous mobile robots. They chose Husky as their mobile base because it is “well crafted and relatively easy to upgrade”. The opportunity to combine both their own technology with that of Clearpath, was extremely attractive to them. Finally, they believe that in terms of engineering and reliability, the Husky platform performs on a higher level than the competition. The Husky’s technical specifications alongside Clearpath’s focus on cooperation and collaboration made the Husky the best option for them.

RoboTech Vision’s foray into universal algorithms continues with their research work and alongside Husky they will continue to effectively manage their projects and complement their technology. Beyond the Andover 2, they will look to apply their algorithms to a variety of solutions including robotics, web applications, android development, and hardware development.