Ridgeback Takes 3D Printing to the Next Level 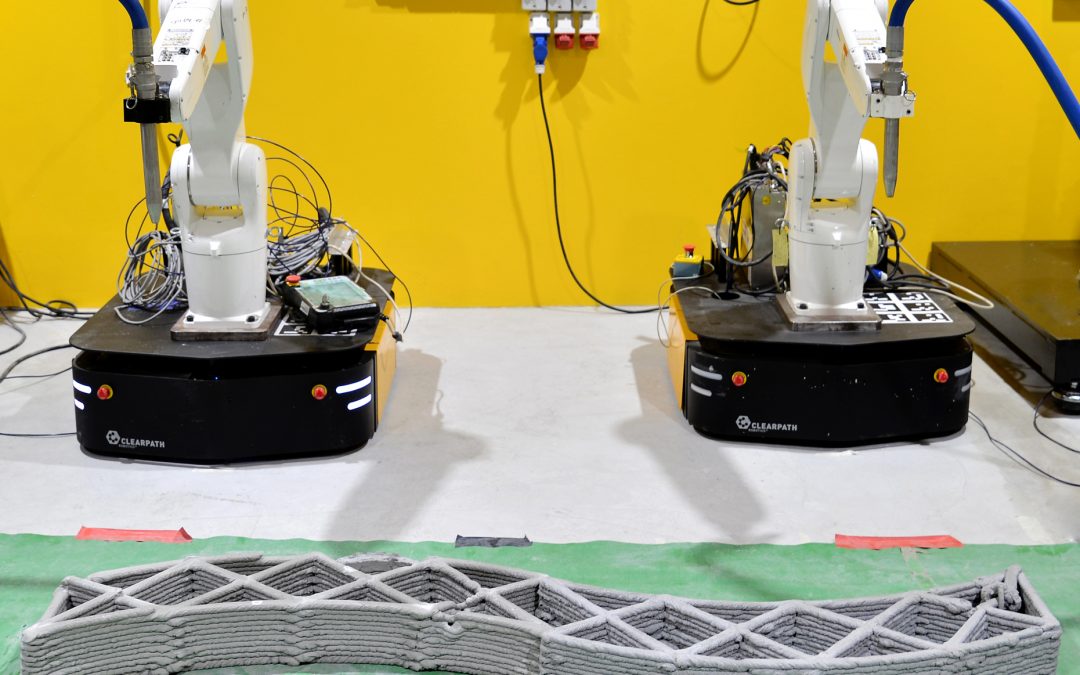 How can you print something larger than the printer itself? That’s the problem researchers Xu Zhang, Mingyang Li, Quang-Cuong Pham, and others set out to solve at the Singapore Centre for 3D Printing at Nanyang Technological University (NTU).

Their solution: mounting the 3D printers on a pair of Ridgeback mobile robots, who work together to print different sections of the same part.

Impressively, the robots work at the same time and in overlapping workspaces. In fact, the paper, published in August 2018, marks the first time a large concrete structure has ever been 3D-printed by multiple robots concurrently!

As you can see, mounting 3D print nozzles on robot arms is nothing new. What’s different here is that the researchers mounted the arm itself on a mobile base—allowing the print nozzle to move around in a bigger workspace—and they figured out how to get two robots to build a structure at the same time.

The result is a scalable system: one that lets the user introduce as many robots as needed to complete a printing task quickly and efficiently. 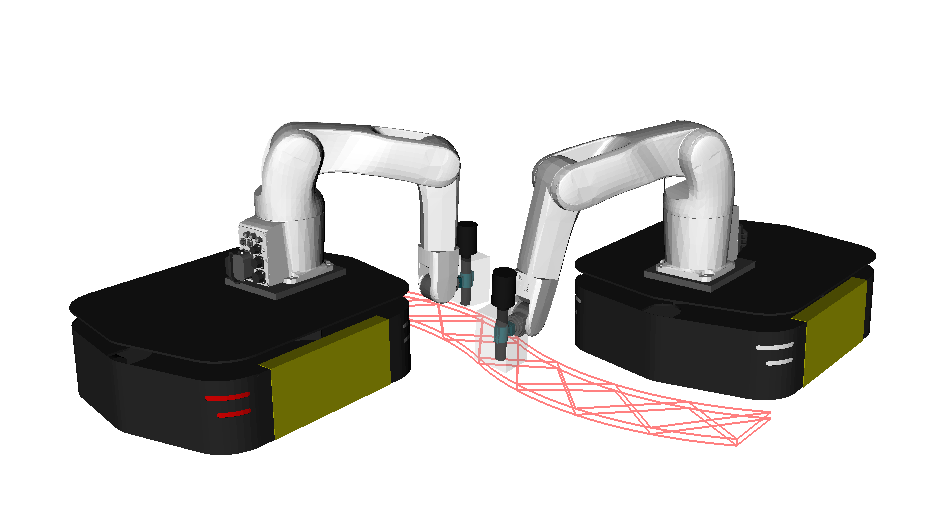 The team started with a 3D simulation of the Ridgeback-based robots, planning the “nozzle path” of the structure they wanted to print.
Image source: NTU Singapore

How it all works

The team started with 3D models of each hardware component (provided by the manufacturers). Working within a CAD program, they planned the “nozzle path” for the structure they wanted to print. This was essentially just slicing the desired structure into layers, each of which represented a path that the robot arm would follow.

Then they planned the robots’ motions, taking care to avoid collisions. This was an iterative process: the team had to create a motion plan, run a simulation, identify any collisions, fix the plan, re-run the simulation…

Finally, they set the robots loose to print the structure (see video below).

You might notice a guy holding a teach pendant in the background. He’s not controlling the robots—once the robots have been programmed, the building process is entirely autonomous. He’s just there to hit “stop” in case the robots go haywire and start spraying cement at the walls (which fortunately hasn’t happened yet).

The team used two Clearpath Ridgeback mobile robots in their experiments. These indoor robot platforms served as the base upon which the robotic arm, controller, sensors, pump system, and print nozzle were mounted.

As Quang-Cuong Pham, Assistant Professor of Mechanical and Aerospace Engineering at NTU, says, “The Ridgeback was a great choice for us because of its high payload capacity. Other mobile platforms simply wouldn’t meet the demands of the job.”

He explains, “Our robot arm weighed 50 kg, and with the nozzle, controller, and all the rest of it on top of that we were adding 70 kg total to each platform. Fortunately the Ridgeback has a 100 kg payload, so we didn’t have to worry about overloading it.”

The high payload capacity wasn’t the only benefit. The team also liked how the Ridgeback has holonomic drive, with four independently driven, omni-directional wheels.

Conventional robots-on-wheels are non-holonomic: they can only move backwards and forwards, not side-to-side. The Ridgeback, by contrast, can move in all directions. This makes it much easier to maneuver in precise paths. 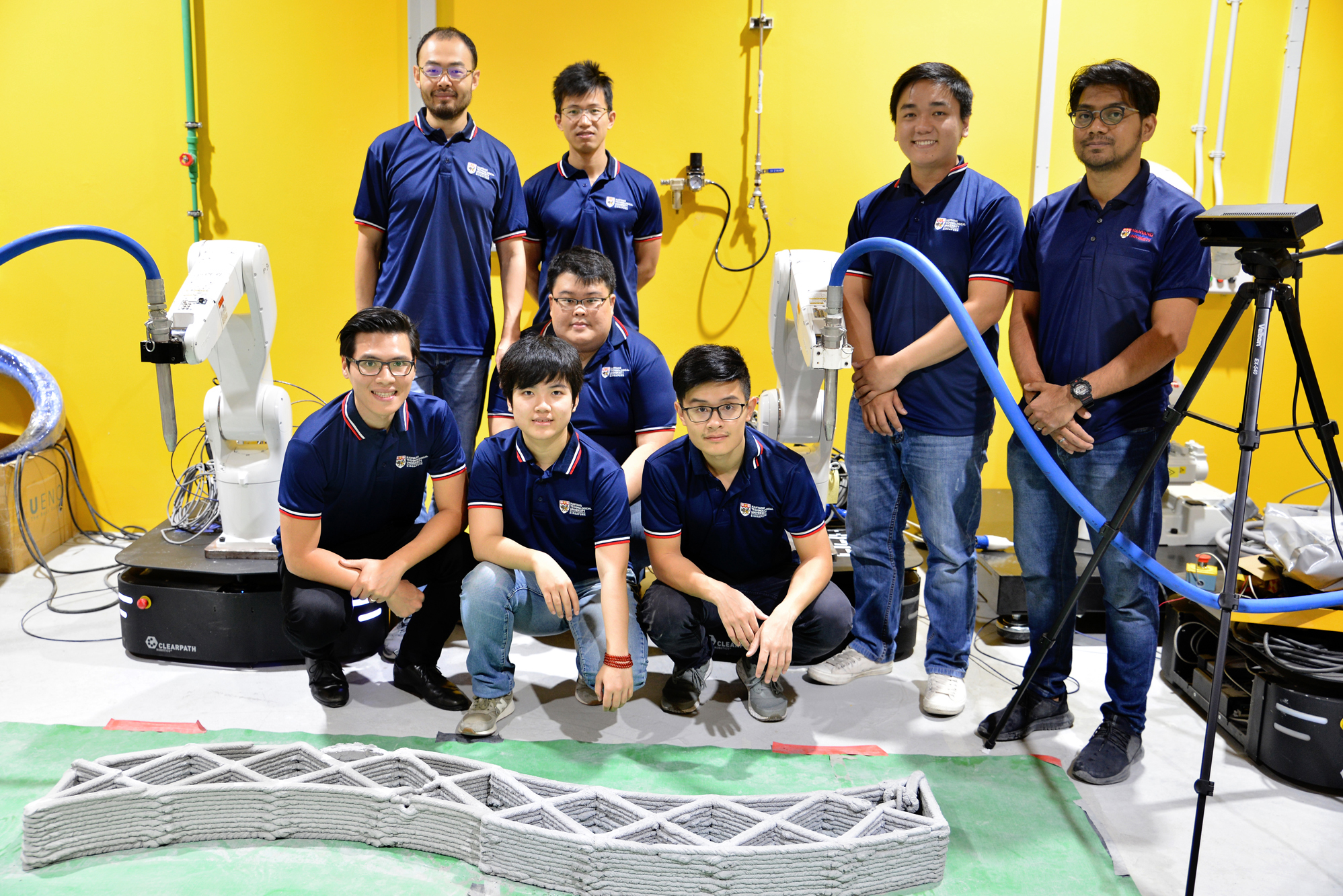 After publishing this paper, the team wanted to take their mobile printing system to the next level—by building one that could print while moving. They wasted no time, finding a solution within just a few months!

So far in this blog post, we’ve been discussing a system where the platform remains motionless while the robot arm prints the object. But in the team’s latest method (detailed in this paper), the platform and printing arm move simultaneously.

Check it out in the video below.

Why is this such a big deal? Because it overcomes a huge hurdle to printing bigger structures. With the old stationary system, the robot could only print within the area its arm could reach. To build bigger structures, you had to put multiple robots to work alongside each other.

With the new system, though, this size limit no longer applies. Since the robot can move around, you can build much bigger structures with just one robot.

Of course, there’s still a lot of work to do. The team wants to integrate more sensors, explore better part-joining strategies, and develop a motion-planning solution for multiple printing-while-moving robots.

And they won’t stop there. In alignment with NASA’s 3D-Printed Habitat Challenge, their ultimate goal is to create robots that can build autonomously in extreme environments—from the most remote caves on Earth to the moon, Mars, and beyond.

To learn more about the Singapore Centre for 3D Printing, click here.