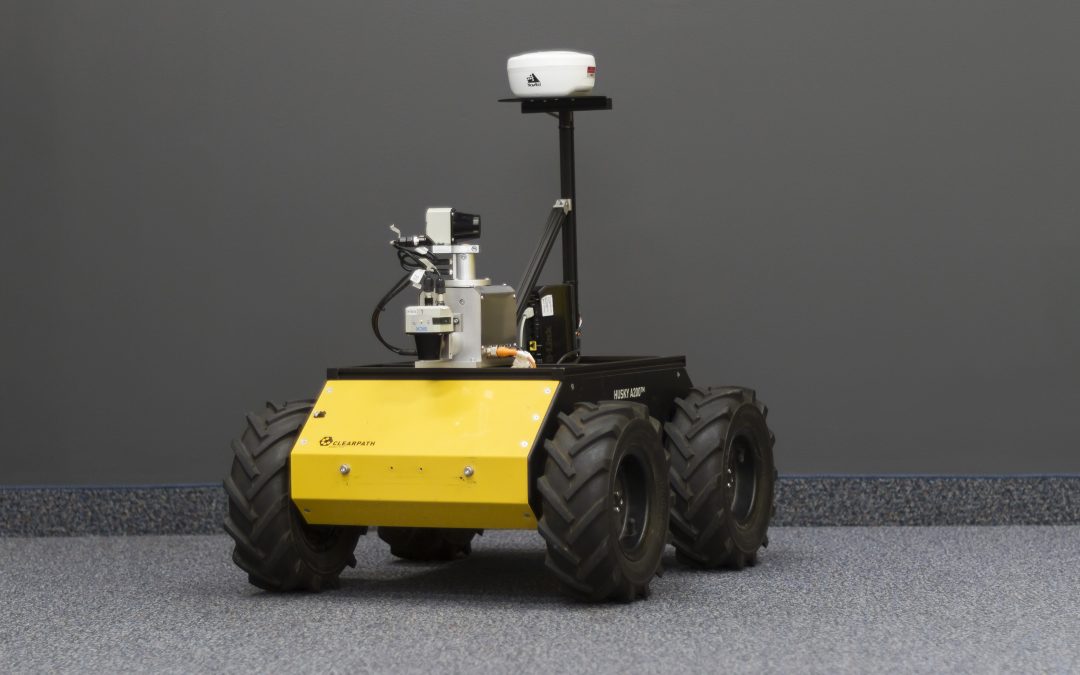 The need for fast, accurate 3D mapping solutions has quickly become a reality for many industries wanting to adopt new technologies in AI and automation. New applications requiring these 3D mapping platforms include surveillance, mining, automated measurement & inspection, construction management & decommissioning, and photo-realistic rendering. Here at Clearpath Robotics, we decided to team up with Mandala Robotics to show how easily you can implement 3D mapping on your own Clearpath robot.

3D mapping on a mobile robot requires Simultaneous Localization and Mapping (SLAM), for which there are many different solutions available. Localization can be achieved by fusing many different types of pose estimates. Pose estimation can be done using combinations of GPS measurements, wheel encoders, inertial measurement units, 2D or 3D scan registration, optical flow, visual feature tracking and others techniques. Mapping can be done simultaneously using the lidars and cameras that are used for scan registration and for visual position tracking, respectively. This allows a mobile robot to track its position while creating a map of the environment. Choosing which SLAM solution to use is highly dependent on the application and the environment to be mapped. Although many 3D SLAM software packages exist and cannot all be discussed here, there are few 3D mapping hardware platforms that offer full end-to-end 3D reconstruction on a mobile platform.

We will briefly highlight some more popular alternatives of commercialized 3D mapping platforms that have one or many lidars, and in some cases optical cameras, for point cloud data collection. It is important to note that there are two ways to collect a 3D point cloud using lidars:

1. Use a 3D lidar which consists of one device with multiple stacked horizontally laser beams
2. Tilt or rotate a 2D lidar to get 3D coverage

Tilting of a 2D lidar typically refers to back-and-forth rotating of the lidar about its horizontal plane, while rotating usually refers to continuous 360 degree rotation of a vertically or horizontally mounted lidar.

The MultiSense SL was developed by Carnegie Robotics and provides a compact and lightweight 3D data collection unit for researchers. The unit has a tilting Hokuyo 2D lidar, a stereo camera, LED lights, and is pre-calibrated for the user. This allows for the generation of coloured point clouds. This platform comes with a full software development kit (SDK), open source ROS software, and is the sensor of choice for the DARPA Robotics Challenge for humanoid robots.

The 3DLS-K is a dual-tilting unit made by Fraunhofer IAIS Institute with the option of using SICK LMS-200 or LMS-291 lidars. Fraunhofer IAIS also offers other configurations with continuously rotating 2D SICK or Hokuyo lidars. These systems allow for the collection of non-coloured point clouds. With the purchase of these units, a full application program interface (API) is available for configuring the system and collecting data.

The Cartographer Backpack is a mapping unit with two static Hokuyo lidars (one horizontal and one vertical) and an on-board computer. Google released cartographer software as an open source library for performing 3D mapping with multiple possible sensor configurations. The Cartographer Backpack is an example of a possible configuration to map with this software. Cartographer allows for integration of multiple 2D lidars, 3D lidars, IMU and cameras, and is also fully supported in ROS. Datasets are also publicly available for those who want to see mapping results in ROS. 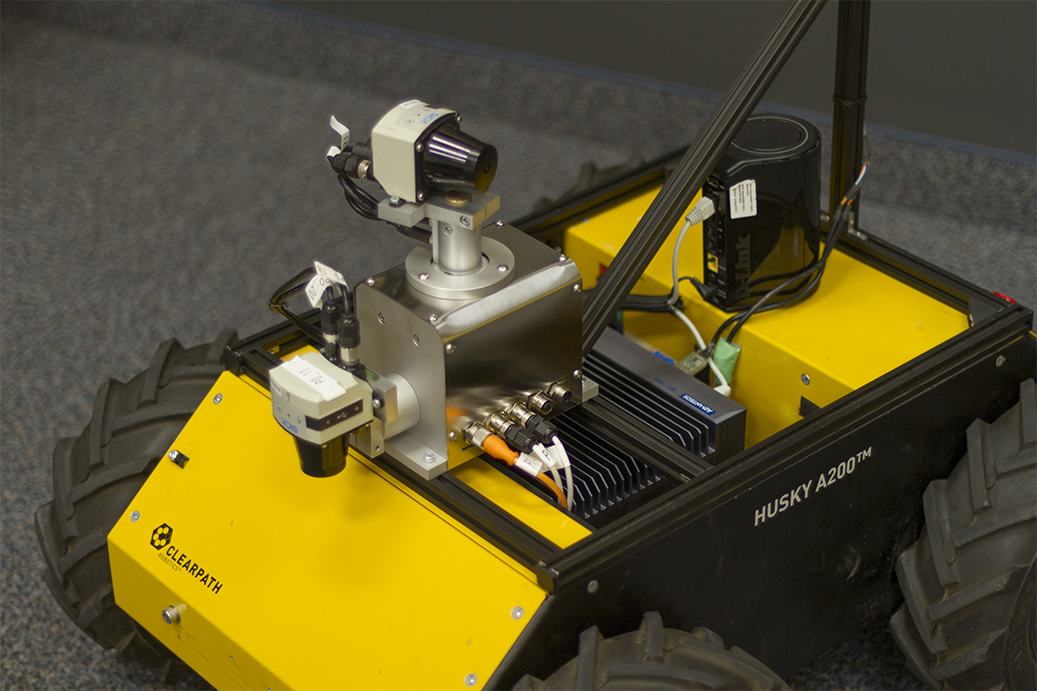 Thanks to the team at Mandala Robotics, we got our hands on one of their 3D mapping units to try some mapping on our own. This unit consists of a mount for a rotating vertical lidar, a fixed horizontal lidar, as well as an onboard computer with an Nvidia GeForce GTX 1050 Ti GPU. The horizontal lidar allows for the implementation of 2D scan registration as well as 2D mapping and obstacle avoidance. The vertical rotating lidar is used for acquiring the 3D point cloud data. In our implementation, real-time SLAM was performed solely using 3D scan registration (more on this later) specifically programmed for full utilization of the onboard GPU. The software used to implement this mapping can be found on the mandala-mapping github repository.

Scan registration is the process of combining (or stitching) together two subsequent point clouds (either in 2D or 3D) to estimate the change in pose between the scans. This results in motion estimates to be used in SLAM and also allows a new point cloud to be added to an existing in order to build a map. This process is achieved by running iterative closest point (ICP) between the two subsequent scans. ICP performs a closest neighbour search to match all points from the reference scan to a point on the new scan. Subsequently, optimization is performed to find rotation and translation matrices that minimise the distance between the closest neighbours. By iterating this process, the result converges to the true rotation and translation that the robot underwent between the two scans. This is the process that was used for 3D mapping in the following demo.

Mandala Robotics has also released additional examples of GPU computing tasks useful for robotics and SLAM. These examples can be found here.

The following video shows some of our results from mapping areas within the Clearpath office, lab and parking lot. The datasets collected for this video can be downloaded here.

The Mandala Mapping software was very easy to get up and running for someone with basic knowledge in ROS. There is one launch file which runs the Husky base software as well as the 3D mapping. Initiating each scan can be done by sending a simple scan request message to the mapping node, or by pressing one button on the joystick used to drive the Husky. Furthermore, with a little more ROS knowledge, it is easy to incorporate autonomy into the 3D mapping. Our forked repository shows how a short C++ script can be written to enable constant scan intervals while navigating in a straight line. Alternatively, one could easily incorporate 2D SLAM such as gmapping together with the move_base package in order to give specific scanning goals within a map.

Why use Mandala Mapping on your robot?

If you are looking for a quick and easy way to collect 3D point clouds, with the versatility to use multiple lidar types, then this system is a great choice. The hardware work involved with setting up the unit is minimal and well documented, and it is preconfigured to work with your Clearpath Husky. Therefore, you can be up and running with ROS in a few days! The mapping is done in real time, with only a little lag time as your point cloud size grows, and it allows you to visualize your map as you drive.

The downside to this system, compared to the MultiSense SL for example, is that you cannot yet get a coloured point cloud since no cameras have been integrated into this system. However, Mandala Robotics is currently in the beta testing stage for a similar system with an additional 360 degree camera. This system uses the Ladybug5 and will allow RGB colour to be mapped to each of the point cloud elements. Keep an eye out for a future Clearpath blogs in case we get our hands on one of these systems! All things considered, the Mandala Mapping kit offers a great alternative to the other units aforementioned and fills many of the gaps in functionality of these systems.