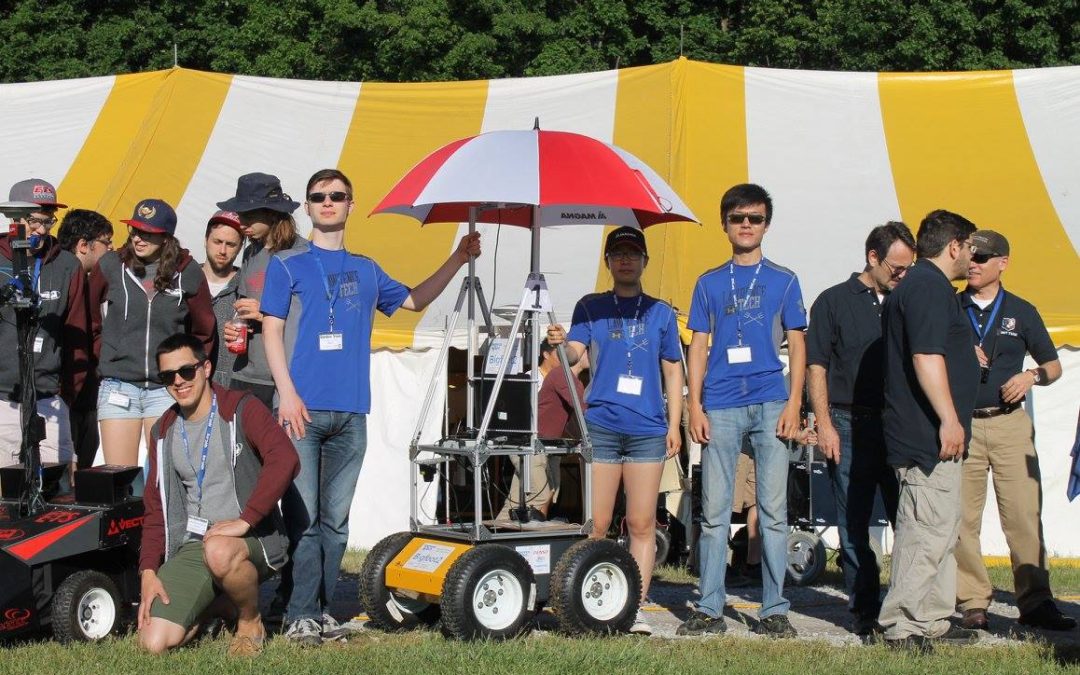 The International Ground Vehicle Ground Competition (IGVC) is an annual event that brings together teams of college students from all over the globe to compete in an autonomous ground vehicle competition. Teams are tasked to design and construct a fully autonomous unmanned robotic vehicle that can navigate around a challenging outdoor obstacle course under a prescribed time. This year’s IGVC went down in June at Oakland University, and while the competition was stiff, only one team could come out on top. That team was Lawrence Teach University (LTU), whose robot, Bigfoot 2, was built using the Husky UGV robotic platform. We had a chance to sit down for a quick Q&A with team captain, Gordon Stein, to learn more about the design of the robot, challenges and key lessons learned by taking part in the competition.

Q: Tell us a bit about the design of Bigfoot 2?

A: Bigfoot 2 uses the Clearpath Husky platform, with our own frame and electronics placed on top of it. For sensors, we have a 2D LIDAR, a camera, a GPS, and a compass. The computer we used was one of the laptops our school provides to students. This meant we could easily get a replacement if needed. Our software is made in C#, which makes it easier for students in the robotics programming course to join the team.

We modified the platform to have larger tires with a smoother tread. The original tires had too much traction, and we were afraid that we would get disqualified from them ripping up the turf at the competition. In addition, it makes it easier for the robot to turn in place, and made the robot able to go slightly faster. 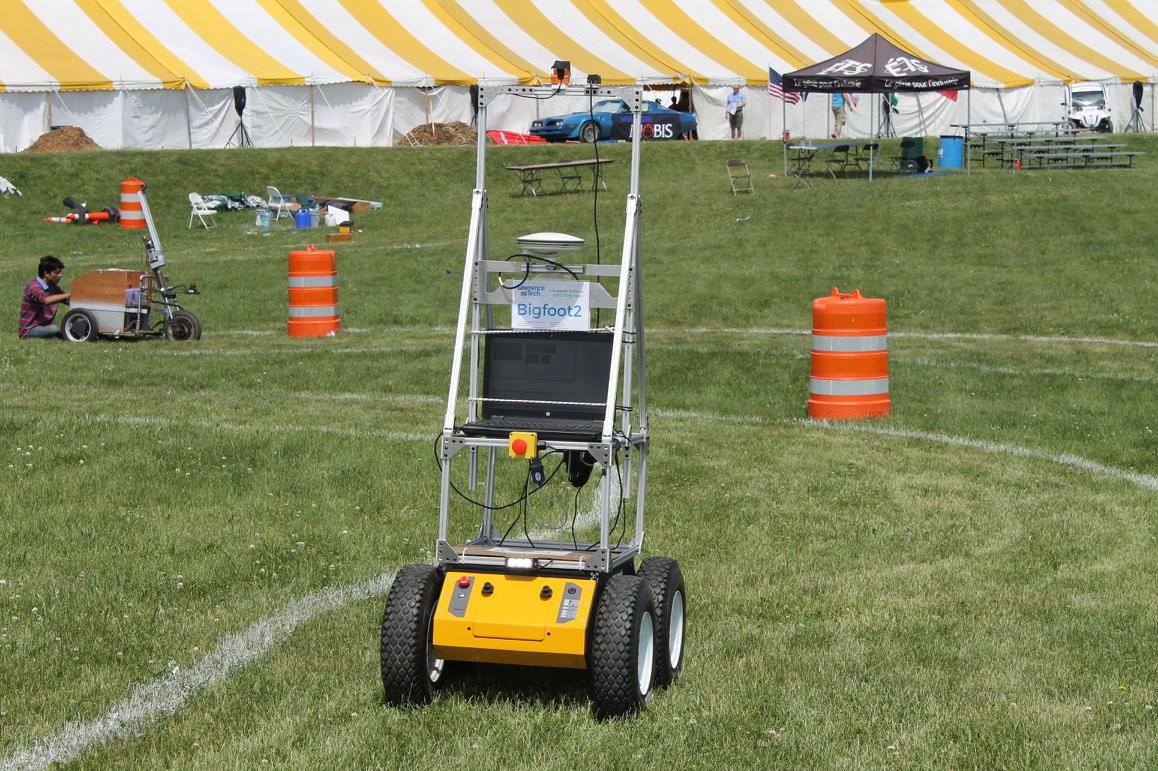 Q: Why did you choose the Husky UGV as your mobile base over other mobile platforms or creating your own?

A: Our team’s philosophy was to use as many “off-the-shelf” components as possible. We represent the Computer Science department, so we wanted to spend as much time as possible on our programming. Using an existing platform allowed us to have a working robot earlier in the year, so we could start programming instead of waiting for the chassis to be assembled.

Q: What was the most challenging part of preparing for the competition?

A: The most challenging part is testing. Our team has a simulator we made in a previous year, and we had set up a practice course on campus, but we still couldn’t prepare for everything at the competition. This is especially difficult because we don’t know the obstacles ahead of time. In the previous year, we didn’t prepare for ramps and a ramp stopped us. This year, we tested to make sure it could go over ramps and no ramps were at the competition. The advanced course always has obstacles that none of the teams are ready for, and that’s part of the challenge.

Q: What aspect of the design were you most and least worried going into the competition?

A: We were most worried about waterproofing. Our team tradition for the past few years had been to just attach an umbrella to the robot, but this doesn’t win us any points with the judges, and it doesn’t let us run in serious rain. The Husky chassis is water resistant, but the electronics we had on top of it is not. We purchased some vinyl material to use for waterproofing, but we weren’t able to make it into a real cover in time.

We were least worried about the new tires. We tested them to make sure they would work on slopes and ramps, and they definitely improved the steering. 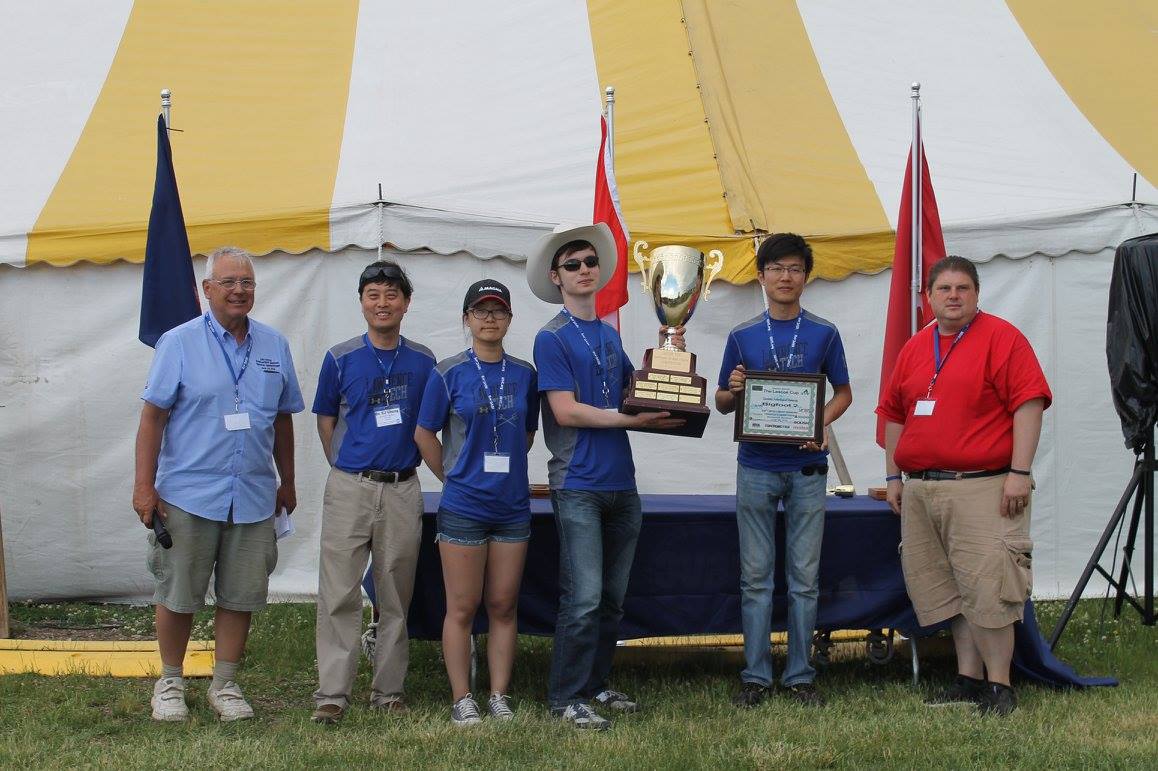 Q: What were the key lessons learned by participating in the IGVC competition?

A: The key lesson we learned was to keep things simple. Some of the teams had very elaborate sensors and relied on dozens of ROS packages for their code, and many of them seemed to be having issues at the competition. While a 3D LIDAR would’ve opened up some new possibilities, we only needed a 2D LIDAR to see the barrels.

Q: What advice would you give to teams participating in next years challenge?

A: Our advice would be to spend time trying new ideas. We had one team member whose job was to try new ways to automatically adjust our camera to changing lighting conditions. None of them ended up being used at the competition, but it still allowed us to see what possible other solutions there could be.