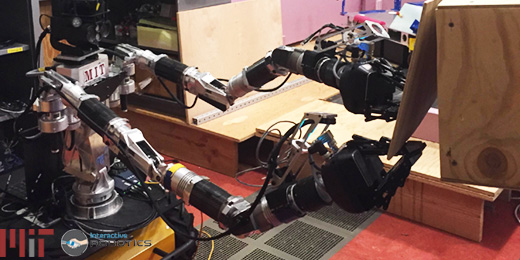 Clearpath’s flagship robot, the Husky Unmanned Ground Vehicle (UGV), was conceptualized initially so humans could safely detect and remove land mines. True to those origins, Husky is now being used by Julie Shah’s team at the Massachusetts Institute of Technology (MIT) to research robotic intervention in a similarly deadly situation: bomb disposal. The team integrated Husky with RE2’s Highly Dexterous Manipulation System (HDMS) and is using the setup to test their teleautonomy interface. Their goal? Elevating human-robot communication to high-level commands like those you’d give to a human worker.

Husky as a hub for integration

“Mobilization is the big difference between an industrial robot and a field robot,” Shah says. “In an industrial setting you can cage and structure your work, but in the field the robot needs to go to a particular location to do work. Often the location changes.”

In addition to enabling work in different positions, Shah says that mobilization also enhances the abilities of the manipulator. “You get better reach capabilities. You can reposition the base and change the angle to let you get at an object from a different vantage point, which gives you flexibility.”

MIT’s Husky, which they have named Optimus, has also been integrated with a MultiSense camera from Carnegie Robotics, allowing researchers to see Husky’s surroundings in 2D video and 3D point cloud formats. 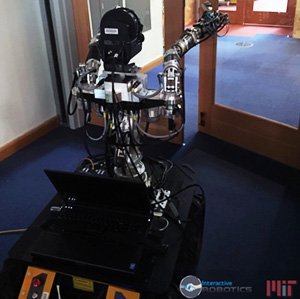 Shah’s team puts Husky to the test to ensure it can handle various rugged environments. Physical dexterity is one element, but they also use Husky to develop an innovative communications interface.

“We’ve been developing an interface at MIT for teleautonomy where a person can command the robot at a higher level of abstraction.” Shah explains that instead of giving commands such as “drive forward” or “reach with this specific joint,” in a tele-autonomy interface the human can give higher level commands.

Shah explains that the teleautonomy interface lets robots do what they’re good at, while humans help with the machine’s deficiencies.

“The person says ‘drive here, stop and reach out so the gripper is a specific orientation in space.’ Then the robot figures out the joint angles to achieve that end pose. This is the type of thing that is difficult for a human to do, whereas getting a robot to make sense of shapes and how to grasp and move them is quite hard. The person watches the execution of the robot in simulation, and they can either confirm it’s the right motion or fix it.”

Shah has iterated many generations of bomb disposal robots over the last 3 years, but the RE2-Husky integration is the most complex system to run their teleautonomy software so far.

Saving lives in the field

“Husky provides a less expensive but very capable mobile base to be able to prove out the concepts and technologies,” Shah says.

Shah’s teams’ teleautonomous system will be vital in increasing the efficiency of EOD operators deployed in emergency or disaster situations. In dealing with improvised explosive devices, for example, seconds count. These are seconds that can be saved by elevating levels of communication between humans and robots.