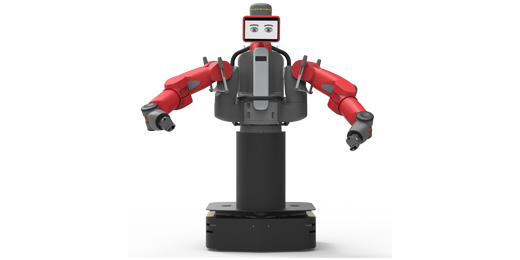 This week Clearpath unveiled the newest member of its robot fleet: an omnidirectional development platform called Ridgeback. In addition to carrying heavy payloads (up to 100 kg), it easily integrates with a variety of manipulators and sensors to deliver unprecedented indoor mobility to platforms like Rethink Robotics’ Baxter. 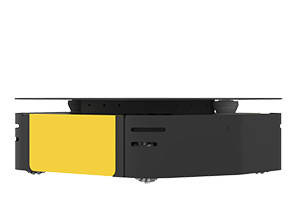 Ridgeback’s rugged drivetrain and chassis moves manipulators and other heavy payloads easily, with plenty of external user space for custom hardware. It also features independently-driven omnidirectional wheels (you may have heard them called Mecanum, which is actually a brand name) for precise control and three degrees of freedom in constrained environments.

“Many of our customers have approached us looking for a way to use Baxter for mobile manipulation research – these customers inspired the concept of Ridgeback. The platform is designed so that Baxter can plug into Ridgeback and go,” said Julian Ware, General Manager for Research Products at Clearpath Robotics. “Ridgeback includes all the ROS, visualization and simulation support needed to start doing interesting research right out of the box.”

Like all other Clearpath robots, Ridgeback is ROS-ready and designed for rapid integration of sensors and payloads right out of the box. Its easy-access fused 5V, 12V and 24V user power opens a world of possibilities, and special attention was given to the integration of Ridgeback and Baxter research platform.

Throughout the development process for Ridgeback, our team worked closely with Rethink Robotics to ensure the Baxter would be able to easily integrate; “Giving Baxter automated mobility opens up a world of new research possibilities,” said Brian Benoit, senior product manager at Rethink Robotics. “Researchers can now use Baxter and Ridgeback for a wide range of applications where mobility and manipulation are required, including service robotics, tele-operated robotics, and human robot interaction.”