Getting to the Bottom of Alberta’s Tailings Deposit Ponds – with Husky!

A tailings deposit pond is a pool of mud deposits that has been left to dry out; however, the deposits in Alberta are taking much longer to dry than expected and plans to reclaim and develop the sites have been delayed. That’s where the University of Alberta’s Integrated Reliable Oil Sands Systems Lab (IROSSL) – they’ve partnered with Copperstone Technologies to build up Husky to handle the extreme terrains and facilitate research initiatives for soil sampling. 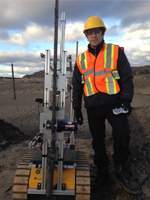 Olmedo stands next to a payload-heavy Husky

Under the leadership of PhD student, Nicolas Olmedo, the IROSSL is currently researching soil properties through sample collection in order to determine how tailings deposits change and dry over time. If they can crack the code on what’s taking the land so long to dry out, they might be able to encourage a fix for it and actually start redeveloping the land with community parks and housing.

The problem is that getting the soil samples isn’t that easy. “Traditional methods for soil collection are completed by human operators – they are labor intensive, expensive, unreliable, and not accurate,” said Olmedo. “Most importantly, you can’t do it every day, so the information is not received in a timely manner.” In other words, manual methods do not provide consistent data. For this reason, Olmedo’s team purchased a Husky UGV as it was the only mobile platform on the market that could handle a wide variety of payloads and the rugged terrain of tailings deposit ponds.

A Simple Task? Not So Much 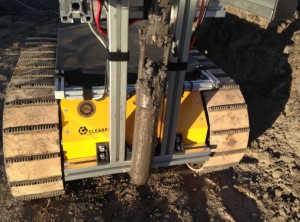 Husky includes an ice augger to drill into the mud deposits.

This might be the most dec’d out Husky we’ve ever seen! After all, one of the most appealing features for this team was Husky’s ability to handle a variety of application-specific payloads and a high payload weight.

This Husky is fully equipped with an ice auger to drill into the surface of the ponds, hard core treads to traverse the mounds of dirt, soil-sampling equipment, and modified sensory instruments to determine parameter estimation and real-time data collection. It also (of course!) runs on ROS (the Robot Operating System) which has helped the team get their research to the field much faster than expected; “The sensor integration, monitoring systems, estimation algorithms, and tele-operation were all done using ROS,” explained Olmedo.

Where are they today?

The team’s hardcore, mud slumping, fiercely modified Husky successfully navigated its way through several field trials across Alberta; “Husky survived being on several tailings deposits,” said Olmedo. The research team has partnered with Copperstone Technologies to present a successful technology demonstration in Fort McMurray, Alberta, for some of Canada’s top ranked organizations within the oil sands industry. Additionally, the oil sands operators have expressed an interest in continuing to work with the team and are eager to see the research progress!