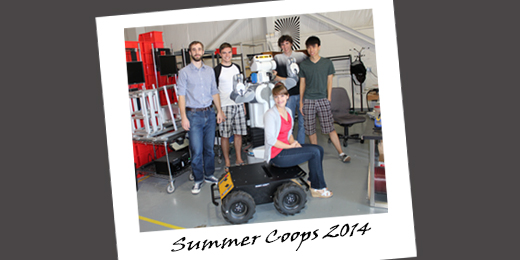 The summer has been a busy one! The company grew from 45 to 55 full-time employees, we moved into a brand new office space, we introduced custom robotic solutions to our offering and we officially tapped the keg in our kitchen. Our coop students had a blast and we loved having them here! Check out the type of projects they completed during their coop term below, and if you think there’s a fit for you at Clearpath, be sure to keep an eye out on upcoming opportunities!

An experience to remember!

The coop positions over the summer spanned disciplines in electrical, mechanical and environmental engineering, finance, and computer science. As the Mobile Robotics Electrical Designer, Kevin – from the University of Waterloo (UW) – was responsible for providing assistance with finalizing designs, ordering components and completing testing on a custom robotics project for a high profile customer. With deadlines in place, Kevin received the real-world experience he was looking for in his coop term, “after many late nights, we finally go to the point where we could get the robot on the ground and complete terrain testing – it was definitely a proud moment for me and an exciting one!” 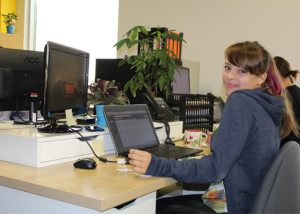 Elisabetta came onboard as our Financial Analyst and Operations Planner from Wilfred Laurier’s coop program; she played a key role in setting up new company-wide transaction procedures, cleaned up financial reports, and helped to make decisions that will impact Clearpath for years to come! She also noted that she had time to improve her beach volleyball skills at the company picnic, “I was so terrible, it wasn’t even funny! But my team was nothing but supportive, which is a perfect example of the awesome people that work at Clearpath.”

As a UW coop student – and computer science guru – Tim wrote a piece of networking software and helped with embedded drivers for two large customer projects. “Taking a project from the very beginnings to a working prototype was very rewarding,” said Tim. “I was responsible for a piece of the overarching system; it really made me feel like I was truly contributing to something useful.”

Brendan, also coming from UW, was our Mobile Robotics Design Engineer who was responsible for some major designs on one of the largest robotics projects completed by Clearpath to date! He was accountable for a large portion of the mechanical design and dealing directly with customer requests. “It was an outstanding opportunity to gain experience in a real-world design setting while under tight deadlines and strict requirements. In the end, the project was a success, and the robots, as always, were totally bad-ass.” Brendan’s most memorable experience was when he worked directly with our CEO, Matt Rendall, on an important project involving a large amount of industrial design and conceptual mechanical work. “It was amazing to be creative and use my design skills without being limited by design constraints – an amazing opportunity for any engineer, let alone a coop student!” said Brendan.

Kevin improved and excelled his skills with hands on experience, “I learned a lot of electrical-mechanical practices involving spec’ing and designing higher level electrical systems, as well as good wiring practices and techniques.” Meanwhile, Elisabetta had the opportunity to work with inventory for the first time and learn an entirely new accounting software system in her four month coop stint. Tim brushed up on best-practices; “I learned about things that were new to me like low-level networking protocols, socket programming in Linux and embedded microcontroller development. There were other things that I already knew about, like ROS, but working here really took my knowledge to a professional level.”

For Brendan, the three main things that stuck out for him were: 1) Document like you’ll forget it all tomorrow – with fast-paced, integrated teams, there are a lot of pieces to the puzzle to keep track of. 2) Fail faster – “At Clearpath, the principle that nothing is a mistake if you learn from it carries much further than a cheery tagline.” And 3) Love what you do – “To me, it’s very clear why the people at Clearpath are successful: they love what they do.” 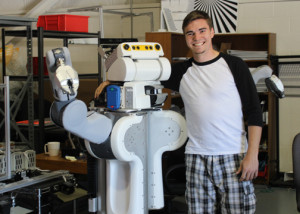 All in all, it seems like Clearpath is a great place to work, but don’t take our word for it! Check out what some of the summer coop students thought about our vibe.

“Clearpath is a great work environment with friendly and fun coworkers,” said Kevin. Here at Clearpath, everything is open concept, from the way the desks are setup to our communication practices; “It was amazing to work in an environment that is so open. Employees don’t ‘discriminate’ because you’re a coop; I was treated as a full member of the team. The entire company knows what’s going on with each department; there isn’t any secrecy or segregation and collaboration is a huge part of the culture,” explained Elisabetta.

Contribution and inclusion are also key items to consider when reflecting on the coop experience. Tim said, “I felt like I was really contributing something worthwhile to a team of extremely knowledgeable people. Bigger projects than I would normally be given as a coop student, were thrown my way, but the support was there to complete them.” Brendan agreed that Clearpath maintains a “welcoming nature”, “I’ve never experienced a corporate culture like that of Clearpath’s. I felt like a valuable member of the team, and was given relevant, meaningful work that challenged and pushed me as an engineer, as a designer, and as a student. I learned more in my 4 months here than I have in years in the classroom.”

Learn how other students get real world experience at Clearpath

Read up on Coop students from 2013’s Fall Term