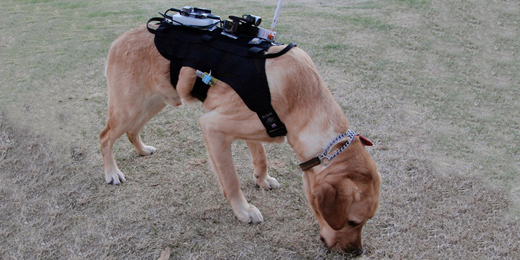 No matter how much time and energy and money we put into a robot, it’s going to be a very very very long time before we come up with anything that’s anywhere close to as capable as a dog. From a robotics perspective, dogs are utterly amazing: they’re fast, efficient, able to cover all sorts of terrain, can understand both verbal and gestural commands, and they run on dog food. Dogs do have some limitations: they can’t move rubble, and they’re not that great at flying, either. Robots can do these things, but in a disaster scenario, the key is getting all these different pieces (robots, dogs, humans, and anything else) to work together in a coherent way. 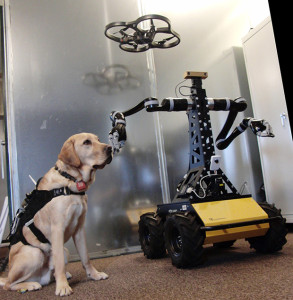 The Smart Emergency Response System (SERS) is trying to make this work, using a combination of “ground and aerial autonomous vehicles, drones, humanoids, human-operated telerobots, and trained search-and-rescue dogs equipped with real-time sensors” to save as many lives as possible in an emergency. 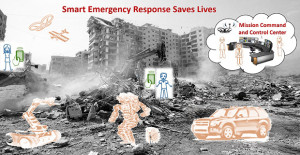 This [image on right] may be one of the most charmingly terrible graphics I’ve ever seen, but I like how it shows an ATLAS with what I think might be a dog next to it, and we all know how well dogs and robots get along. Anyway, the SERS system combines whatever kinds of communications are available (Wi-Fi, cellular, Bluetooth, etc.) to connect autonomous and semi-autonomous robots with a centralized command center.

The dogs are intended to be an integral part of this system, and they’re being outfitted with modular “cybernetic suits” that can be rigged up with a variety of sensors depending on the situation. The suits also monitor the dogs themselves, sending back their heart rates so that their handlers can make sure that they’re doing okay. It works in the other direction, too, with speakers on the vests relaying vocal commands, and embedded tactile systems providing gentle nudges to steer the dogs remotely.

The idea of having dogs work closely with robots is an interesting one: dogs have successfully carried and deployed snake robots by themselves, and we’re curious to see how far this level of interaction can be extended.