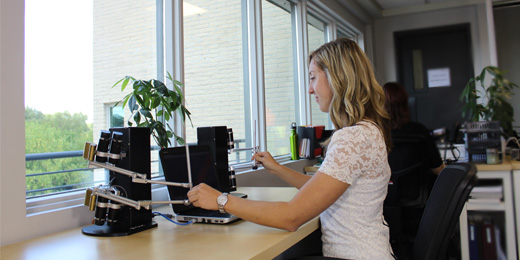 We’re excited to announce that we’ve partnered with Entact Robotics to bring the world advanced haptic technology for small workspace research. The W5D is a modular device capable of being integrated with handles spanning three to seven degrees of freedom. With virtually zero backlash and mechanical gravity balancing, this haptic is made for small workspaces, but it has big time impact on research. Here’s an inside look on this leading edge haptics systems… 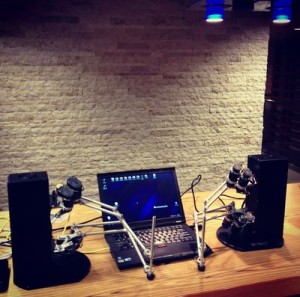 Instead of controlling and manipulating the linkages through gearing, or a classical CAPSTAN system (which uses cables), the W-Series engages in Direct Drive haptic technology – it couples the drive motors using a solid linkage to the arms, resulting in a higher quality end user experience.

All of the motors are set on the shoulder of the W-Series system to minimize the inertia of the system …in other words, it makes the package super light in your hand. Together, the direct drive technology, solid linkages and pre-loaded bearings reduce the backlash to virtually zero. To put this into perspective, other haptics use gear or cable linkage systems that can shake or feel like loose joints when the user is operating them, but the W-Series Haptics Controller is smooth and balanced.

This brings us to, quite possibly, W-Series’ coolest feature: the whole system is gravity balanced. Since the perceived mass is virtually zero, the end user can experience perfect balance in all directions, whether the system is oriented upside down, sideways, or right side up. This mechanical gravity balancing capability, for position and orientation, allow the system to fit advanced interface requirements. So to sum up: it’s light, has zero backlash, and is gravity balanced.

What are researchers doing with it? 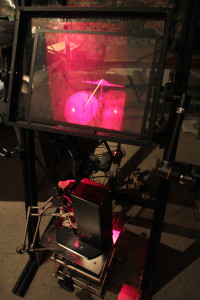 The W-Series Haptic Controller is used in three main areas of research interaction: 1) Assisted 2) Virtual and 3) Tele-operational. These areas essentially cover anything from rehabilitation tasks, like guiding a hand to draw a circle or write a letter, to interacting with medical simulations, to teleporting their operation to a far space, (whether that’s controlling a robot arm from a distance or overseeing nano-manipulation).

The University of Ontario College of Art and Design (OCAD) have used the W-Series platform to interact with holograms. They call it haptic holography. The user not only sees the holligram, but they feel it too. They’re latest setup was a virtual drum set on a 3D hologram; using the haptic system, we rocked out! Believe it or not, the research outcomes from haptic holography will someday be used in medical simulation.

Get a handle on things 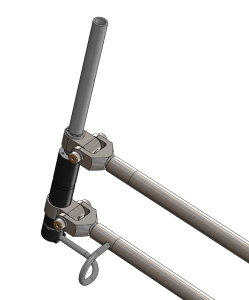 Like all of Clearpath’s product offering, W-Series Haptic Controller is completely modular and can be adapted to fit specifications of your research projects. So with the base system as a starting point, users can attach implements to create three, four, five, six, or seven degrees of freedom on their unit.

The pen grip comes with the base system, and there are multiple other handles available including the pen grip with two programmable buttons, the pen grip with a deadman handle (which has a capacitive touch sensor inside), a micro pincer (to allow scissor action or to control a slave robot), or thimble handles (so the user can control the system with their fingers).

Why do customers love the W-Series Haptics Controller?

With haptics, you have to feel it to believe it. Once users touch it and experience the haptic sensation that the system is capable of rendering, the typical expressions we’ve seen are shock and surprise – users are realizing touch points they have never felt before! W-Series is able to render very high force resolution so users can sense the tiniest bit of force feedback.

The million dollar question: is it ROS compatible?

Just like all Clearpath products, the W-Series Haptic Controller will be ROS-compatible. Our botsmiths are working their magic to create something awesome and you’ll be the first to know once it’s released. The system was specifically made to allow quick and smooth integration into existing projects. So rest assured that the API, firmware, and software will be 100% open to the lowest level possible.