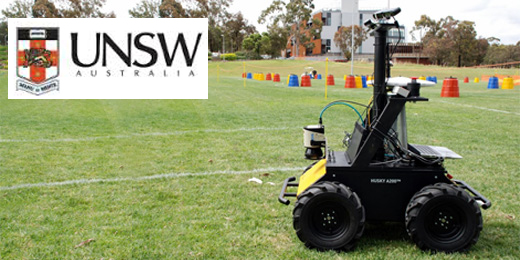 Husky is autonomous and made for rugged environments, so it only made sense that Dr. Mark Whitty’s team at UNSW Australia (University of New South Whales) entered their integrated Husky system into the 1st Annual Autonomous Ground Vehicle Competition (AGVC) in Australia. As luck – or truly skill – would have it, the entry paid off, winning the team 1st place in the autonomous navigation challenge and 2nd place overall in the competition.

A route to the course

Using the publish-subscribe core of ROS for message passing, Husky for operation, third-party drivers for sensor integration, and an advanced GPS, Whitty’s team customized Husky to autonomously navigate through the AGVC obstacle course. The course was laden with barrels, bins and fences and, while moving around the hazards, Husky was required to stay in between specific lanes and not drive out of bounds. 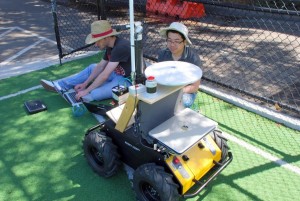 The team setup shop outside to make last minute adjustments for the obstacle course.

As you can imagine, making it to the competition was no easy task. The team experienced a number of challenges spanning speed control, systems integration with ROS, resources, and perhaps the biggest test of all: time. “Systems integration was aided by ROS and Clearpath’s support for open source code, but we needed more time to increase robustness,” said Whitty. “Overall, we learned the importance of rigorous testing once the full system is assembled. Also, the simple whiteboard approach to coding worked well.”

Whitty provides much thanks to the School of Mechanical and Manufacturing Engineering and the Mechatronics group at UNSW Australia, “they have made our AGVC participation possible,” said Whitty.

What’s up for grabs? 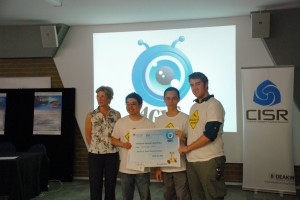 AGVC is sponsored by the Defence Science and Technology Organization to stimulate robotics research in Australian tertiary institutions. For the first year of the competition, the theme was ‘Autonomous Navigation’ and included three stages:
1) Technical qualification to test vehicle and team compliance to competition rules
2) Successful completion of the autonomous navigation test
3) Overall design of the system.
Up for grabs was $15,000 along with 2 economy return airfaires to compete at IGVC in the USA. This time around, however, the money was not awarded since none of the teams were able to reach the ‘money barrel’ in the competition.

Whitty’s team took home 2nd place overall with a cool $3,000 to help out with future development of their system.

The future of autonomous navigation

We asked Mark Whitty where the future of this technology will be. Here’s what he had to say: 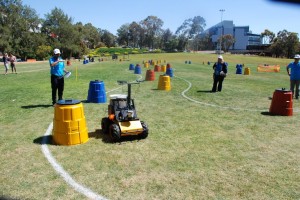 The team’s Husky on the obstacle course performing autonomous navigation.

“Automated service vehicles will become more widespread in the future – their emergence has already begun! Cars and larger vehicles with increasing degrees of autonomy will be as common as hybrid and electric cars are now. Extensive self-diagnosis within software systems such as ROS will substantially reduce the learning curve and allow these incredibly complex software systems to be much more widely used. Basic autonomous behaviours will become achievable on lower budget robots, making them far more accessible in less developed countries where they will be put to use as labour saving devices, this raising productivity and living standards globally” – Dr. Mark Whitty, Lecturer at UNSW Australia.

See how other customers are using Husky UGV