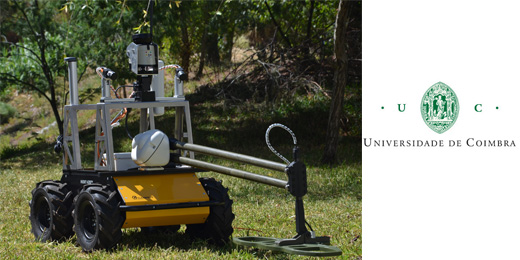 Clearpath robots automate dull, dirty and dangerous jobs, and University of Coimbra is using Husky with no exception to this vision. The team is researching and developing new methods for autonomous landmine clearance and we were thrilled to present them with the Special Award – Humanitarian Contribution as part of the 2012 Partnerbot Grant Program, inaugurated to support advancement in robotics research. Here’s how Coimbra is saving lives, one bot at a time. 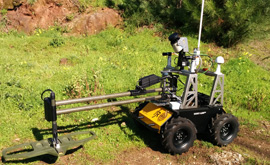 It’s estimated that over 20 thousand people lose their lives in mine-related accidents each year; this is the stat that pushed the Department of Electrical and Computer Engineering at the University of Coimbra to create an autonomous minesweeping vehicle.

Minesweeping is extremely dangerous and time-intensive, and it’s currently completed by humans. Aside from the fact that using a robot to clear landmines is much safer, it’s also efficient and never gets tired.

How do they do it?

With the overarching goal to develop autonomous humanitarian demining, the team set out to accomplish three key tasks:
1) Perceive terrain characteristics (obstacles and terrain traversability)
2) Navigate across the terrain
3) Use the vehicle to cover a suspicious area with a set of landmine detecting sensors to detect and localize landmines 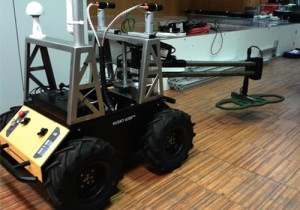 The ISR Lab created this minesweeping robot using Husky to save lives.

Husky was an ideal fit for the project because of its ability to conquer rough, outdoor environments. They dec’d it out with navigation and localization sensors, a custom 2DOF robotic arm fitted with a metal detector, and ground penetration radar. The information from the complementary sensors provides robust mine detection and a low false detection rate. They also use a computer vision stereo system while depth imaging was combined with state-of-the-art point cloud perception algorithms.

Taking full advantage of Husky’s open-source compatibility, the team used ROS for everything robotic. “The fact that the Husky works with ROS out of the box is priceless,” said team member Gonçalo Cabrita. “We integrated the Husky with the remaining sensors and actuators in no time. Thirty minutes after unboxing Husky, it was being tele-operated around the lab!”

Achievements and next steps 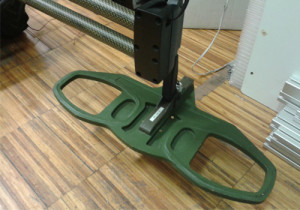 To gather the info they were looking for, the team required a robotic arm with a mounted plate to detect mines in the field. The problem was that there wasn’t a robotic arm in the market that met all their specs, so the team developed their own that was easily mounted to Husky. They learned the hard way that if their custom arm stops moving, the dataset becomes incomplete – as they work on their third iteration of the arm, the team’s making sure is has ability for consistent.
Since completing their first round of field tests, the team has submitted a paper that will be presented at ICRA 2014. Once their latest robot arm is attached, the team’s next step is to repeat previous tests and produce a complete dataset.

This is incredible research that’s solving meaning problems and we’re more than proud to support it. With so much buzz in driverless cars and robotics acquisitions, it’s important we don’t lose sight of important humanitarian work that is being accomplished in the world with robotics.

Using a Clearpath robot? Doing some cool stuff with ROS? Let us know!