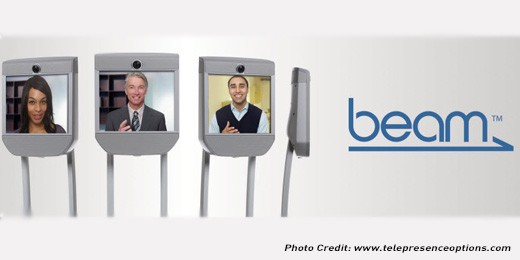 Here at Clearpath, we do things a little differently than what most companies might. Though open concept offices and flexible hours are getting to be standard these days, we go one step further – team members working from home can appear virtually in the office, thanks to the Beam remote presence devices, designed and shipped from Suitable Technologies in Palo Alto, California. The Beams were anxiously awaited by our team, so we put them into practice the moment they arrived! 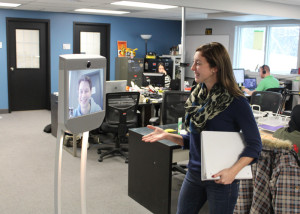 Naming the two Beams was a top priority for our team, despite the warning we received from Ellen McLain at the Music and Gaming Fest this month to “be careful naming robots.” The first Beam is “Ada,” after Ada Lovelace – her pearly white platform floats across the room like mathematical poetry. The second of the two Beams is named “Sheldon,” after Big Bang Theory’s character who truly put this technology into the public eye.

It didn’t take long to get used to talking with someone who’s beamed into the office; of course, the team here is used to the occasional robot driving around their desks. Additionally, with a simple setup and simple login process, Clearpathians were beaming on day one.

Clearpath’s first experience with these easy-to-use, ultra sleek mobile bots was at RoboBusiness 2013. Units were available on the expo floor that enabled our engineering team to join in the fun remotely. Though telepresence robots aren’t yet ubiquitous, we’ve gota ‘clear path’ (pun intended!) of uses for them. 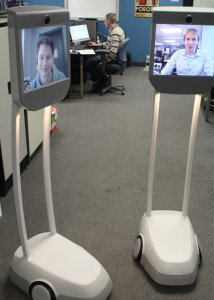 The first and most obvious use is for Clearpathians working from home. Now team members can easily login to the Beam for quick discussions and meetings at the office. Likewise, since our team is spread out around the office, we can beam into other departments to ask questions “in person.” Of course, the first week we started beaming, questions tended to include ‘what are you having for lunch today?’ and ‘did you get my email?’ …Any excuse to beam!

We also plan to experiment with fully remote team members to determine how much of our robot-esque corporate culture can be adapted virtually. It’s not all about us though; we’ve also got some ideas on how these systems can save us and our customers money directly – hosting site visits comes to mind, as does having to send fewer people on the road ourselves.

The Beam remote presence devices aren’t only representative of Clearpath’s culture and work ethic; they’re an example of the leading edge industry we work in. How would you use a Beam? Let us know on Twitter at #cprBotTalk.