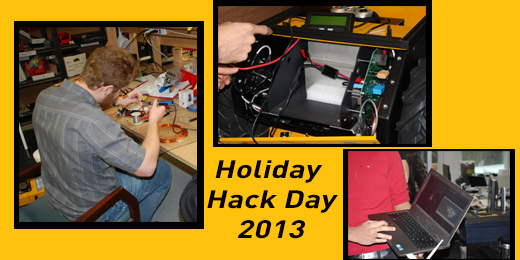 It’s been another successful quarter of building and shipping robots here at Clearpath, and what better way to celebrate than to hold a holiday hack day! Battery upgrades, wireless charging, brushless motor drivers, and a stereo cam with a synched pan-tilt-roll unit – it was an exciting day of team building and innovation.

We used the same budget as the last time ($1000) and with some additional pre-planning teams were well prep’d with the tools and parts they needed to get hacking. We worked around the usual hack day guidelines (mentioned in the hardware hack day blog post), except this time we involved nearly all of the engineering team. Wait a minute, you ask, if all the engineers were at hack day, who took care of engineering requests for the day? Well, most of the requests fell on my plate so most could go uninterrupted while hacking. This wasn’t as fun for me, but I’m sure my upcoming trip to the DRC Trials will make up for a day of meetings!

Unlike the previous event, which was planned out over the course of a few brainstorming sessions, we used our company’s internal wiki (Confluence, for the curious) for most of the pre-planning and budgeting. This is highly recommended for any other companies out there running hack days, as there were a few projects that would require (for example) mechanical engineering assistance for an hour or so during the day, and the wiki page let everyone participating flag these needs.

A few people on the team took full advantage of the advance notice to bring in some longer lead time items. For instance, we designed and fabricated PCBs and borrowed some pricey sensors we don’t happen to have on hand from UW’s Autonomous Vehicles Lab. Some of the projects also combined everything from mechanical design skills to our mapping software, which really lets members of the team get firsthand exposure to the other aspects of building robots they might not see normally. 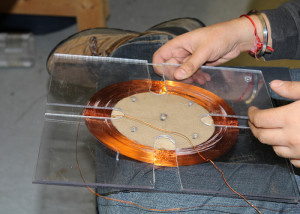 This time around, the general theme of “sensors” emerged; nearly all of the projects we worked on included them in some way. Here’s what we accomplished:

• We took a few hundred feet of copper wire, an old stereo, and some Digikey parts and built an inductive charger. It wasn’t as efficient as we’d hoped, but we’re inclined to blame the stereo.
• We replaced one of our long-duration Husky test setups, which just so happens to be built into the wall, with one that can be mounted on a Husky.
• We built a small scale brushless motor driver prototype, tested it up to 46,000 RPM, and finished up the day by pulling apart one of our robots and replacing the normal motor controller with it.
• We built a version of the Zebedee scanner to see how it works with our unmodified mapping software. The answer is “somewhat”, which isn’t bad for how difficult the problem is.
• We built our own stereo camera and pan-tilt-roll unit out of old webcams, servos, and an Arduino, and connected it to an Oculus Rift via ROS. We had planned on attaching it to our Grizzly, but we forgot that that robot is down in sunny Miami right now.
• We tested out some new battery chemistry for the Husky – hopefully we’ll be able to release this as an upgrade option.

All in all, great results!