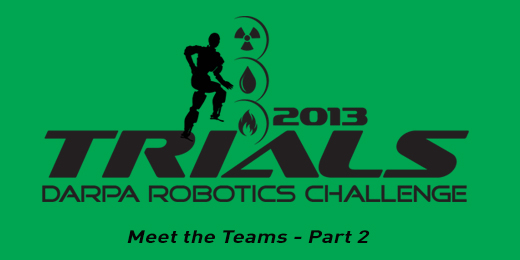 (Cont’d) Track A teams that will be competing at the DRC Trials Dec 20-21, 2013 have received some funding to get them to this phase. We’ve covered Hubo, RoboSimian, and HRP-2, now meet the remaining three teams in this division: 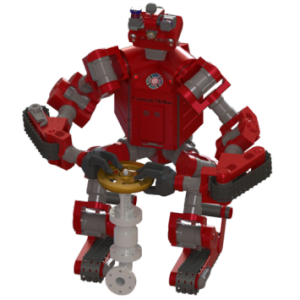 Team ‘Tartan Rescue’ from Carnegie Mellon University is ready for the DRC Trials and they’re not monkeying around! This team will be bringing a 5 foot 2 inches, 400 pound CHIMP …a CMU Highly Intelligent Mobile Platform that is.

With its near-human form factor, work-envelope, strength and dexterity, CHIMP is highly effective in emergency environments because its stabilizers make it capable of maintaining static, rather than dynamic, stability – a typical problem in many humanoid robots. CHIMP has rubberized tracks on all four limbs so it can move upright and also in crawling position.

A 360-degree sensing system uses multi-modal head and joint sensors to map the surrounding environment for its remote operator and to provide feedback to safely move, handle objects and remove debris.

As CHIMP’s design and build was under way, the Team Tartan developed and tested software using a simulator and a surrogate robot arm. The results of the simulation tests were the cherry on top of the hardware design as the robot came together. 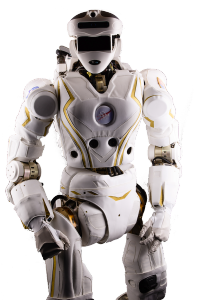 It’s no Storm Trooper! Valkyrie (Val) is NASA’s advanced, battery-powered, 44 degree of freedom humanoid robot that stands a hovering 6.2 feet tall and is 276 pounds. We expect big things from this team since we know they’ll be coming fully loaded with experience and skills from their success with Robonaut (the first humanoid to be flown to the International Space Station).

Team NASA JSC took the age-old adage of ‘divide and conquer’: team members split into three multi-disciplinary groups – hardware, software and firmware – to get this bad boy up and running. With competition on their minds during the design stages, Val was built to be completely modular. By simply removing a bolt and connector, limbs can be taken off and replaced in under fifteen minutes. The head, chest, forearms, knees, and feet are all equipped with a variety of cameras including LIDAR, point-cloud based systems and SONAR. Essentially, anything the robot would be able to see in its environment or on itself is available to the remote operator.

The manipulation and mobility software systems in Val were developed and tested with a virtual simulation system based on Gazebo. Once the robot was built and software was integrated, testing and more development took place to expand the robot’s capabilities for DRC-specific tasks. 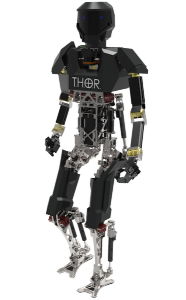 Team THOR is all in for this challenge; “our mission is to save the world – we truly believe that this is why we do robotics.” THOR stands for Tactical Hazardous Operations Robot and promises to be start-of-the-art, light, agile and resilient to perception, and will allow seamless, intuitive control across the autonomy spectrum. The robot uses a series of elastic actuators for the lower body with impedance control; its upper body is equipped with the team’s new smart actuator servo products.

This team has focused their energy around three key areas (hardware resilience, robust autonomy and intuitive operation), and to do so, they’ve partnered with pro’s like University of Pennsylvania, Harris and Robotis.

THOR-OP is the predecessor to THOR and will be used in the DRC Trials since THOR is not yet ready for competition. The platform is high-risk, high-payoff (at least we hope!); however, THOR-OP has been used successfully by University of Pennsylvania and Harris for R&D algorithms for THOR.