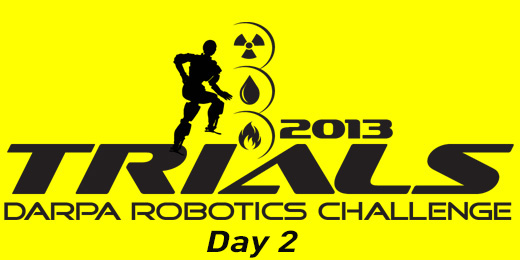 Sci-fi? Not anymore! Walking into what looked like a parallel robot world, we knew this wasn’t going to be just another weekend. We’re on the cusp of a robotic revelation and after this weekend’s display of demos, expos and task performance, it’s more evident than ever before.

DARPA’s program manager for the DRC, Dr. Gill Pratt, explained the total number of points available for teams to collect was 32 (four points per task and eight tasks in total) and shared that the DRC wasn’t sure what to expect in terms of final scores, but he’d be happy if a team got half the total available points. 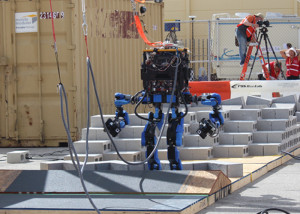 SCHAFT at the Terrain Task

Team SCHAFT dominated day one with 18 points (…we’re thinking Dr. Pratt is a very happy man) and although they set the bar high for the first day, they didn’t stop there. With sixteen teams completing the trials, the five top-scoring teams (and points) were SCHAFT (27), IHMC Robotics (20), Carnegie Mellon University’s Tartan Rescue (18), MIT (16) and NASA JPL’s Robosimian (14)

Whether teams took scores of 27 or 0, all of the teams are eligible to compete the in the DRC Finals in December 2014, which means all teams still have the chance to win the $2 million grand prize. To add a cherry on top, Dr. Pratt said that DRC has $8 million budgeted for the teams and intends to spread the money evenly between the teams.

Competition was fierce and fun!

The trials opened at 9am sharp with three side-by-side tasks in progress (valves, wall, and debris) with each team keeping track of the others’ progress.

Team Mojavaton worked its way around the valves, but to no avail; they were unable to complete that challenge. Meanwhile, Carnegie Mellon University started the day on the wall by using the drill to create a triangle cut-out that would’ve impressed any third grader. 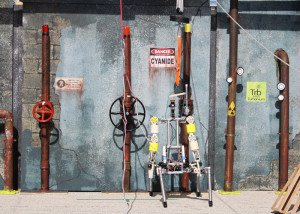 Next to the wall task was the debris challenge where Robosimian flipped itself upside down to pull out phase 1 and 2 of the debris. 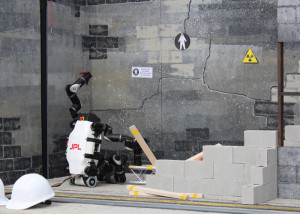 RoboSimian at the Debris Task 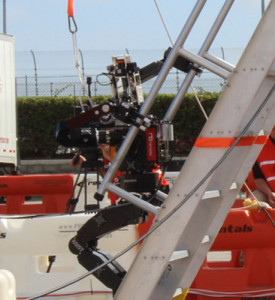 KAIST on the ladder task

On the other side of the raceway, the ladder and terrain challenges took place. KAIST mixed things up a little by climbing the ladder backwards (whatever it takes!)

The jaw-dropping moment of the day goes to WPI who ruled the drive course by completing it – successfully – under the time limit …well done sirs, well done!

An expo for everyone 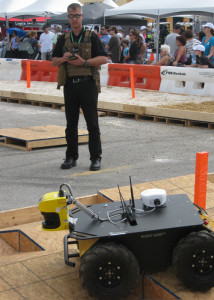 As the trials went on, spectators swarmed the isles to check out all the action – and why not? The DARPA Robotics Challenge was history in the making!

Exhibitors showcased their latest and greatest, from robotic snakes to six-legged bot crawlers to hands-on UAV flying. Even yours truly stepped into the simulation sandbox to showcase situational awareness for military applications – our friends at Rheinmetall outfitted Husky with some seriously cool sensors and military devices. We also showcased Grizzly throughout the weekend, which caught the eye of – what we’re thinking are – next generation robo-heroes… 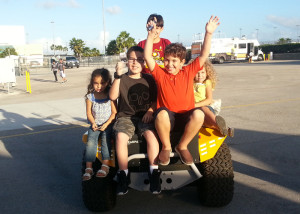