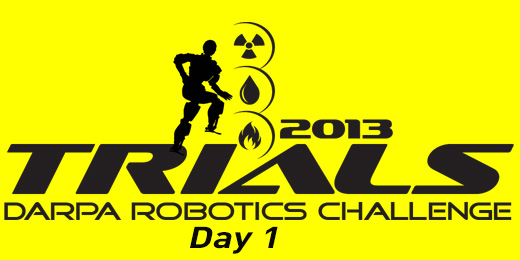 The tents are up, the bots are out, and the DARPA Robotics Challenge is officially under way! Blood, sweat and tears went into these bots as teams were provided less than a year to prepare for this epic two day competition. The weekend has rounded up the best of the best in the robotics world, including NASA, Carnegie Mellon University, Boston Dynamics, and SCHAFT. Clearpath gained exclusive access into the team garages. Here’s day 1: 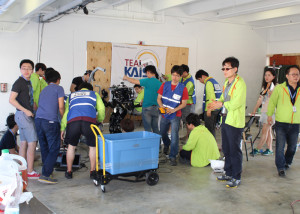 We had the opportunity to speak with the team leads one-on-one in their garages – a busy and exciting place to be! We asked every team what they thought would be their biggest challenge during the trials and the resounding answer was the terrain task. One of the most difficult things a robot can do is find its balance, and although they came practiced, the elements of sun, wind, and a general new environment can cause much unexpected results. But, as task lead for Drexel University’s DRC-HUBO puts it, “things just don’t do what you’ll expect they’d do sometimes” – we figure, that’s a pretty good attitude to go in with!

Overall, team members have learned a ton – from team cohesion, robot transportation, fixes and more. Jun-ho Ho from team KAIST said it all, “We’ve studied robots for ten years, but this is the robot world!”

What are the tasks and who’s in the lead?

All teams were on deck as tasks took place simultaneously. For each task completed, teams had the opportunity to gain four points. Generally the first three points were for each phase in the task (for example, the first door to open would be a simple push, while the second door would be a pull, and the third door a pull with a spring hinge). The fourth point acted as a bonus point in the case that no human interaction was required to complete the task (i.e: if teams didn’t have to make any adjustments to their bot during the task). 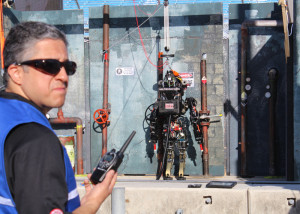 Currently in the lead is SCHAFT with their HRP-2 Based Biped, but that could change quickly and we’ll have to wait and see what tomorrow brings!

As if the competition robots weren’t enough, demos were running throughout the day by some companies you might’ve heard of… 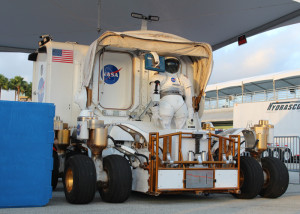 NASA rode in on their Chariot SEV (Space Exploration Vessel) looking awesome as usual. We’re hoping that they’ll soon put Valkyrie in the driver’s seat, but who are we to assume? Then came Boston Dynamics with a couple animal-inspired bots including LS3 and the famous Wildcat. Of course, we had to look twice to see Wildcat fly by! 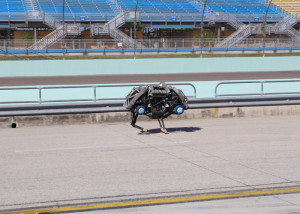 That’s it for now …and imagine, it’s only day one! Stay tuned for more, including official results, which will be released soon!