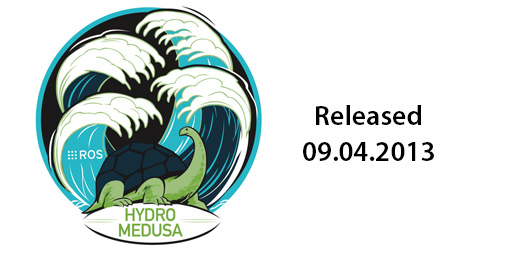 It’s here! The OSR Foundation has announced the release of ROS Hydro Medusa – the 7th official release of ROS. All of our robots are compatible with ROS and, as you can imagine, we’re working hard at Clearpath to officially support this version – it will be available for our bots shortly!

Why the new version?

The ROS community is growing rapidly along with the innovative ROS packages that are sprawling within it. This version is named to be the most capable and robust as of yet and includes over 700 packages in the initial release on all three supported platforms (Ubuntu Precise, Ubuntu Quantal, Ubuntu Raring), click here for more details.

The next version of ROS will be Indigo Igloo and development is already under way. The targeted release date is April 2014. If you want to bring forward or contribute a topic of interest during Indigo’s development cycle, the OSR Foundation recommends that you take a peek at the existing Special Interest Groups (SIG) or start a discussion if your topic doesn’t yet exist.

Indigo will be the first release on the new 12 month cycle, so essentially, April will be our new Christmas! To see the full timeline and surrounding discussions for future updates, check out the ROS user timeline.

For your reading pleasure, here is the official announcement:

We are happy to announce the release for ROS Hydro Medusa! [0] This is the 7th official release of ROS and thanks to the large growing community it is by far the most capable. [1]

This is the result of many contributors. Over 50 maintainers released packages into Hydro during the pre-release cycle. Resulting in over 700 packages available in the initial release on all three supported platforms (Ubuntu Precise, Ubuntu Quantal, Ubuntu Raring)[2] However the publicly released packages is a small portion of the greater ROS ecosystem. The rosdistro repository has 248 public forks where people are working on their own customizations and the repository has already integrated over 1000 pull requests from these contributors. [3][4] We expect people to continue releasing new packages to be built on top of the already released hydro packages as they have done for Groovy and other distributions in the past.

For a quick visualization of the many people committing over the course of the Hydro development cycle we generated a video here: http://youtu.be/tfjqtYqcSHU

With Hydro released we can officially start planning for Indigo Igloo which is targeted for release in April 2014. If you would like to bring up a topic of interest for the Indigo development cycle I suggest you take a look at existing Special Interest Groups(SIG) [5] or start a discussion here on ros-users if you cannot find an appropriate SIG. Indigo will be the first release on the new 12 month cycle as discussed on ROS Users. [6]

Also with the release of Hydro and the beginning of looking at Indigo development we officially drop support for ROS Fuerte. There are several patches which we expect to backport from the Hydro development however in the not to distant future new builds of Fuerte packages will no longer be possible.

The final release also includes many updated packages. For the full list please see below.