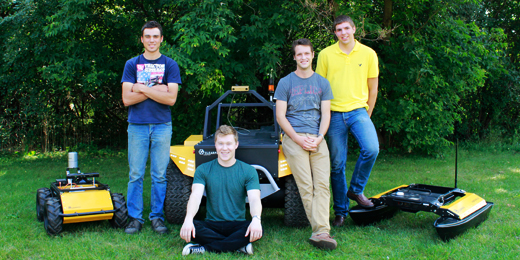 What was their role?

Dylan, from the University of Waterloo, experienced his co-op placement as a Mobile Robotics Software Integrator, or as he liked to call himself ‘Robot Whisperer’. His job over the four-month term was to 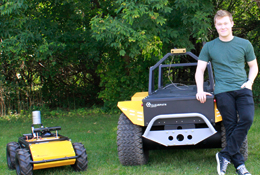 write software for our robots, more specifically autonomous roving and navigation. Rob (from University of Victoria) came onboard as a Mechanical Engineer, also known as the ‘Robot Contraptionist.’ Rob’s key responsibilities were to spend time supporting the design, development and testing of current products, and research and develop new product concepts for future development. Morgan was the second co-op from University of Waterloo and worked with the Kingfisher Unmanned Surface Vessel as an Environmental Engineer – he eventually took on the name ‘Survey Superstar’. Our fourth co-op student came from Conestoga College; Tyler was a Production Assistant, otherwise known as the Clearpath ‘Botsmith.’

Here at Clearpath Robotics, we place a high value on education and learning experiences. We recognize the future of robotics, and the business world in general, and want to make sure that every co-op student finished their term feeling empowered with new experiences and knowledge.

When asked what their proudest achievement was over the last four months, a common denominator was that all of our coop students felt included and accountable for the work they completed. Dylan stated, “Completing the code that I was working on is really rewarding. In the development stage, there were a lot of errors, and finally, it worked and was very gratifying. Not to mention, it was making a robot drive around, which is pretty cool to think I did that.”

Rob also walked away with some great memories; “I’m proud to have been heavily involved in the design and development of a new internal system for one of our robots. It was one of the more extensive projects I’ve worked on and it challenged my engineering abilities in so many ways. I worked on this project from its early stages through to the final prototype, and though I unfortunately won’t be around for production and testing, I feel I’ve contributed fairly largely to its success.” 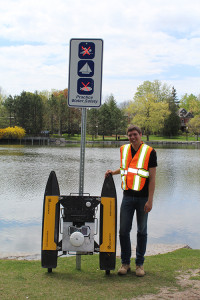 Morgan set a Clearpath record for the number of ponds surveyed in a day, by one person, using Kingfisher Unmanned Surface Vessel – he surveyed 10 ponds! Morgan was pretty humble to accept any recognition and commented, “I don’t have any superpowers or anything, I just made sure I had the materials I needed; the day was pretty straightforward.” It was a new record for us, Morgan, and we sure are excited for you!

Cooperative education provides an awesome experience, and we’re so happy we’ve been able to participate in college and university programs. All of our co-op students commented that they were able to learn-by-doing. Co-ops worked on small interdisciplinary teams so students could be involved in every aspect of their project. Overall, they walked away with a greater sense of robotics, the business world, and advanced skills in their area of study.

From a software standpoint, Dylan learned more about local path planning and some fundamental aspects of feature extraction from an environment – a key concept that we’ve become experts in at Clearpath. He also learned about ROS (i.e.: Robot Operating System). It’s no secret we’re huge fans of ROS, so to teach our co-op students about it and have them contribute to the open source community (when applicable) is really exciting! Morgan was able to meet customers, use Kingfisher to conduct surveys and demos, and collect and analyze data from those surveys; ideal experience for his Environmental Engineering program at UW. We were thrilled to hear Rob say, “In general, I learned that happy employees produce better results.” We’re so glad the co-ops enjoyed their time here – we sure liked having them around!

The verdict is in!

Clearpath Robotics is an awesome place to work, but don’t take our word for it. Here’s what our co-op students had to say: 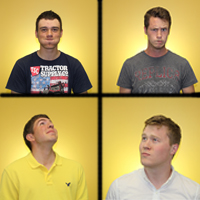 “Clearpath is a very exciting company. It feels as though it’s just beginning to reach the knee of its expected exponential growth. Robotics is an expanding field and Clearpath is one of the major players leading the way. It ought to go without saying that the people and environment are great as well.” – Dylan Drover

“Simply put: Clearpath is the coolest company I’ve had the pleasure of working for. I have never worked with a more helpful and laid back, yet extremely knowledgeable and efficient, group of people. I see nothing but success in Clearpath’s future.” – Rob Rendell

Check out how you can get involved with Clearpath here! Don’t see what you’re looking for? Apply for the General Robotics Enthusiast role.