Innovators, top executives and some of the world’s most recognized companies gather each year to celebrate the Edison Awards. This year, we were honored to join this acclaimed group at Navy Pier in Chicago, and were even more excited to be announced the Silver winner in the category for Applied Technology for Kingfisher M200.

Kingfisher unmanned surface vessel is used mainly for bathymetric surveys, so the robot can go where you don’t necessarily want to send people. It started as a product request from a university professor and was refined over a two year period to include feedback from various customers. 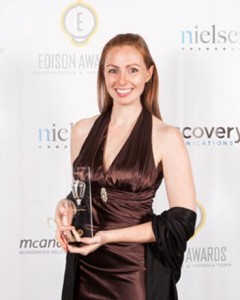 Our account executive extraordinaire, Robin Albrecht, accepted the award on behalf of Clearpath Robotics and explained, “The key thing is, it can take hundreds of times more readings. So instead of picking say ten points across a river and getting those ten data points, this can do thousands.”

A highlight to the event was ‘Meet the Innovators Forum’, which was held at the Chicago Cultural Centre, across the street from The (perhaps more popular) Bean. It was great to see so many robotics companies represented, including Rethink Robotics, Kuka, iRobot, and Liquid Robotics. Not to mention, we had the opportunity to mingle with the likes of Rodney Brooks (Founder of Rethink Robotics), Dexter Cole (Vice President of Programming for Science Channel) and Paul Jacobs (CEO of Qualcomm). 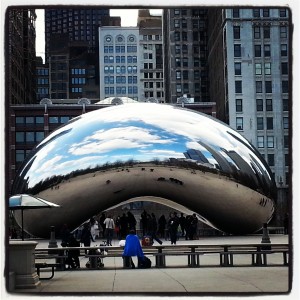 Having a chance to connect with so many other companies doing new and exciting things in a such wide variety of industries – from coffee makers to nature conservation – was an incredible experience. The insight into business practices, product development, and the importance of maintaining a creative workplace was truly invaluable.

The Edison Awards are named after Thomas Alva Edison (1847-1931) whose inventions, new product development methods, and innovative achievements (i.e.: the electric light bulb ) literally changed the world. We are proud, honored and very excited to receive an award in the name of ‘Edison’ and are already in progress with our next big innovation.

See a list of all the 2013 Edison Award winners here.