Warthog UGV takes out the trash in Autotrans project 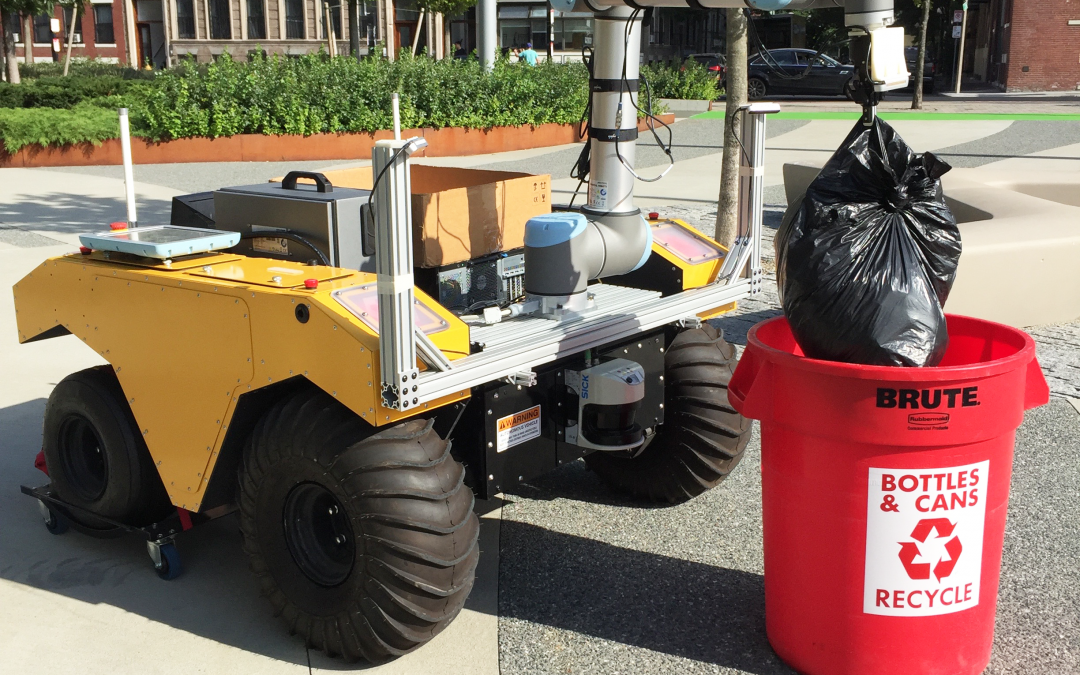 Researchers have created a new autonomous system, called Autotrans, for transporting objects in unstructured outdoor settings—including anything from harvesting fruit in an orchard to collecting trash from city streets.

The system includes both hardware and software components: put them all together, and you’ve got a room-cleaning, trash-collecting, fruit-carrying robot!

Autotrans, which stands for “autonomous open-world transportation system,” was created by researchers Brayan Zapata-Impata from the University of Alicante (Spain), and Vikrant Shah, Hanumant Singh, and Robert Platt from Northeastern University (Boston) in a collaboration at Northeastern’s Helping Hands research lab.

Previous researchers have succeeded in creating systems that can only collect empty bottles, or only pick up trash lying on a patch of grass, for instance—but picking up any type of object, in any environment, has proven much more difficult.

Autotrans sets itself apart in three ways. First, it’s capable of grasping a variety of objects. We already have systems that transport known objects in particular environments, but these are limited to particular applications. For instance, other researchers have developed a forklift delivery system and a way to pick books from library shelves. However, these systems could only grasp specific objects (pallets and books, respectively). Since Autotrans can grasp far more objects, it’s suitable for use in many more applications.

Second, Autotrans is almost completely autonomous. Other systems are able to handle more objects, but they also require more human input. For instance, one system requires visual tags (known as AprilTags) to be added to the environment, while another needs a human operator to control it remotely. Telling a robot how to take out the trash is better than moving the trash yourself, but it still falls short of sitting back while a robot does everything for you. Autotrans has brought us one step closer to that reality!

Third, Autotrans is free of several other limitations that have plagued previous approaches. Grasp-detection systems are often only suited to bin-picking, take a long time to figure out how to grasp an object, and can’t distinguish between overlapping objects. But Autotrans can pick objects off the ground as well as from bins, is relatively speedy, and doesn’t need to distinguish objects in order to grasp them successfully. 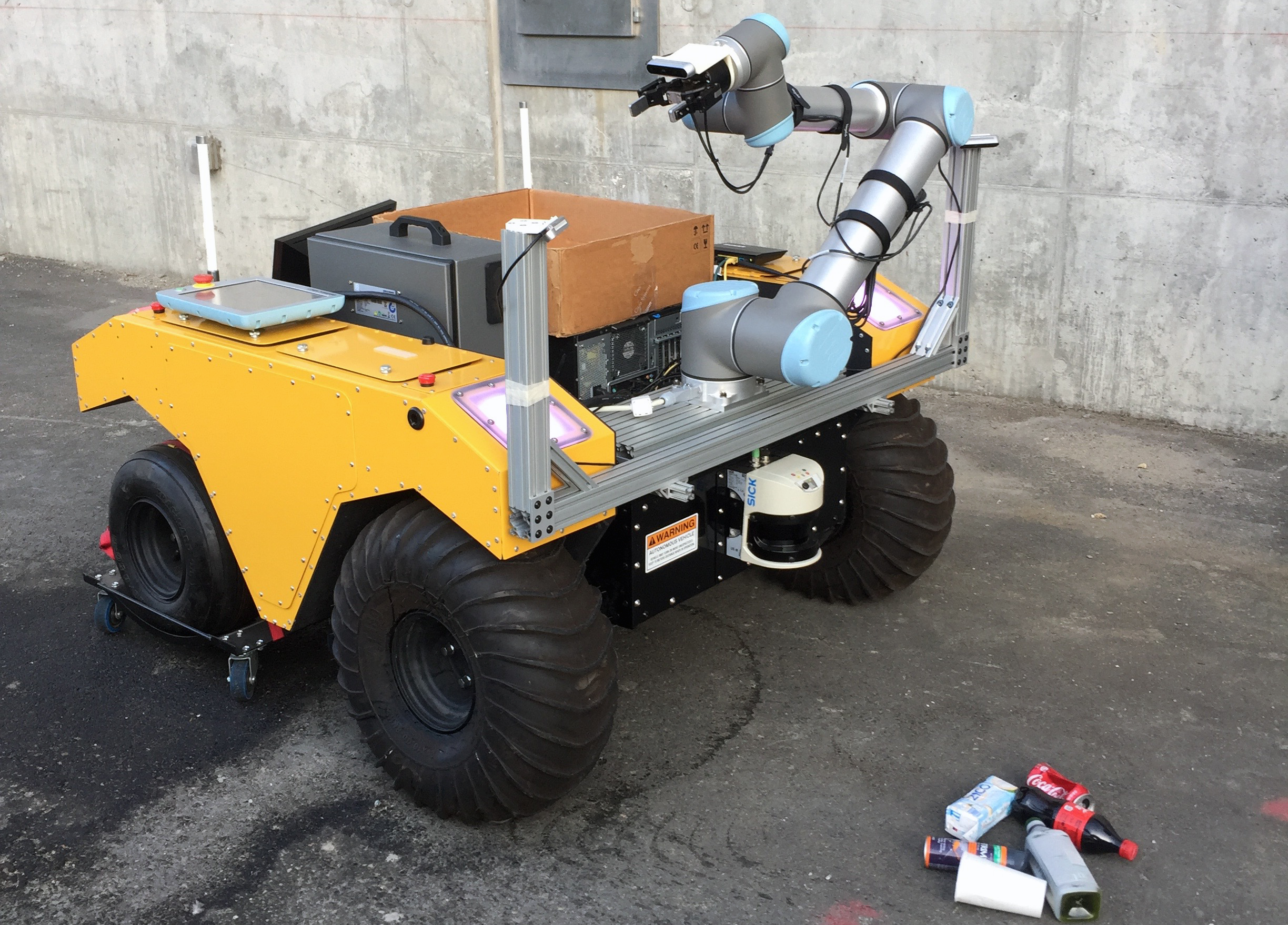 The system is built to navigate to a pick-up point, grasp the desired objects, and deposit them at a drop-off point. To do so, it must overcome two huge challenges: navigating an open-world environment, and grasping unknown objects.

Moreover, most approaches to robotic grasping are based on models. In these solutions, the robot has a database with 3D models of known objects; it determines how to grasp an object by referring back to the stored 3D model. However, this method requires the robot to recognize the object and match it to the database model, so it doesn’t work very well when objects are overlapping or partially hidden.

In contrast, Autotrans does not refer to a model when generating possible grasps, so there is no need for it to distinguish objects. Instead, it takes a laser scan of the object, and then refers to GPD, a publicly available grasp detection software package, to detect the right way to grasp it.

When collecting a pile of trash bags, for instance, Autotrans doesn’t know how many bags there are; it just knows that it has to find a way to grasp the shapeless black mass in front of it.

What’s cool about this method is that the robot “figures out” how to transport an object between two locations all by itself. All a human needs to do is select the pick-up and drop-off points.

Warthog UGV gets the job done

The Autotrans team chose a Clearpath Warthog UGV as one of their hardware components for several reasons.

First, they needed a steady mobile base for a big robotic arm capable of lifting heavy objects.

The UR10 cobot was the best arm for the job, because it had a high payload without being a purely industrial robotic arm. As researcher Brayan Zapata-Impata explains, “Being able to mount this arm on the Warthog was crucial.”

Second, they liked how the Warthog has a flat surface area on top. “It meant we could fit a ton of stuff up there: the UR10, the arm controller, a PC for doing most of the computation, the collection bin…”

The team also appreciated the Warthog’s seamless integration with certain certain distance sensors, like the SICK laser they mounted on its front.

Finally, the Warthog had an excellent battery life. According to Zapata-Impata, “Since the goal was to design an object-transporting robot, we wanted it to work for at least a couple of hours. The Warthog performed flawlessly, even when we ran the system for four continuous hours!”

See the robot in action below:

To learn more about the the Autotrans project, click here.