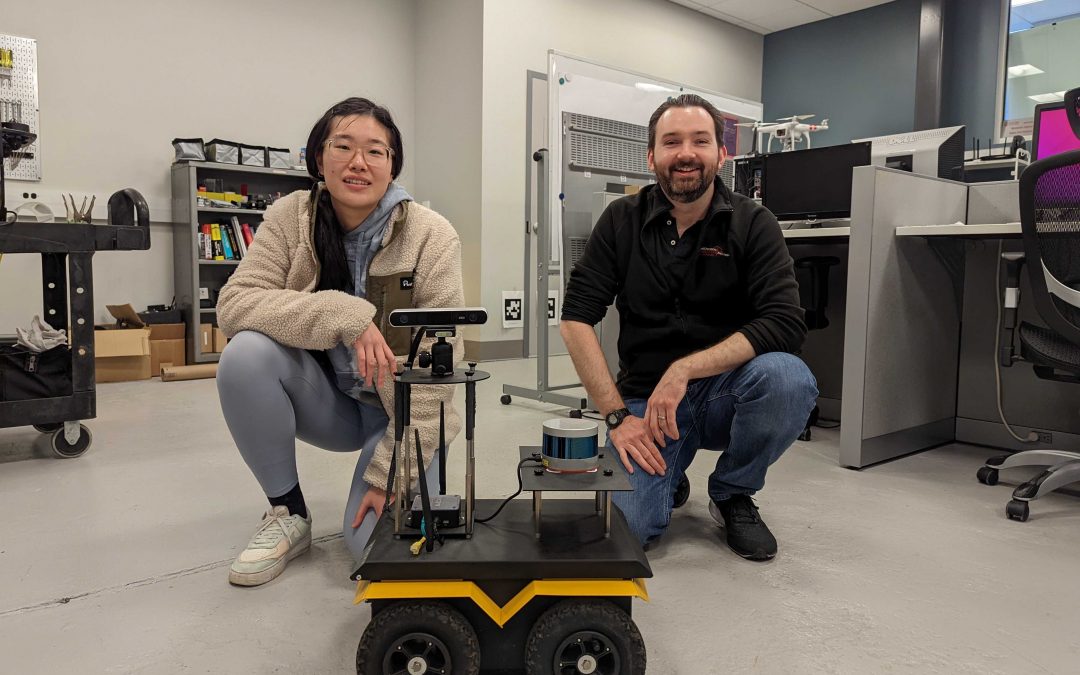 In our previous stories, we’ve often mentioned a core difficulty of robotics being accurate and consistent localization. Managing one robot through processes like SLAM can be difficult enough, but throw in a fleet of robots and the difficulty increases further. Distributed multi-robot SLAM, or in other words, a localization network created by constant communication between individual fleet robots requires frequent message-passing between robots. They must exchange sensor data with each other to understand when their perceptual observations contain common information that can be used to both reduce their localization uncertainty and merge their maps of the surrounding environment. When a team of robots is using 3D lidar to localize and map their surroundings, the messages they may wish to exchange with one another can be very large.

To combat some of these common issues, a team from the Stevens Institute of Technology has developed a new SLAM system using Jackal UGV that integrates several powerful tools that have been impactful in recent robotics research to permit a lightweight exchange of information between robots, while reliably and rapidly producing accurate localization and mapping solutions. Specifically, the goal of their project is to develop a distributed multi-robot simultaneous localization and mapping (SLAM) framework for lidar-equipped mobile robots that is reliable, accurate, real-time viable, and permits data-efficient wireless communication between robots. 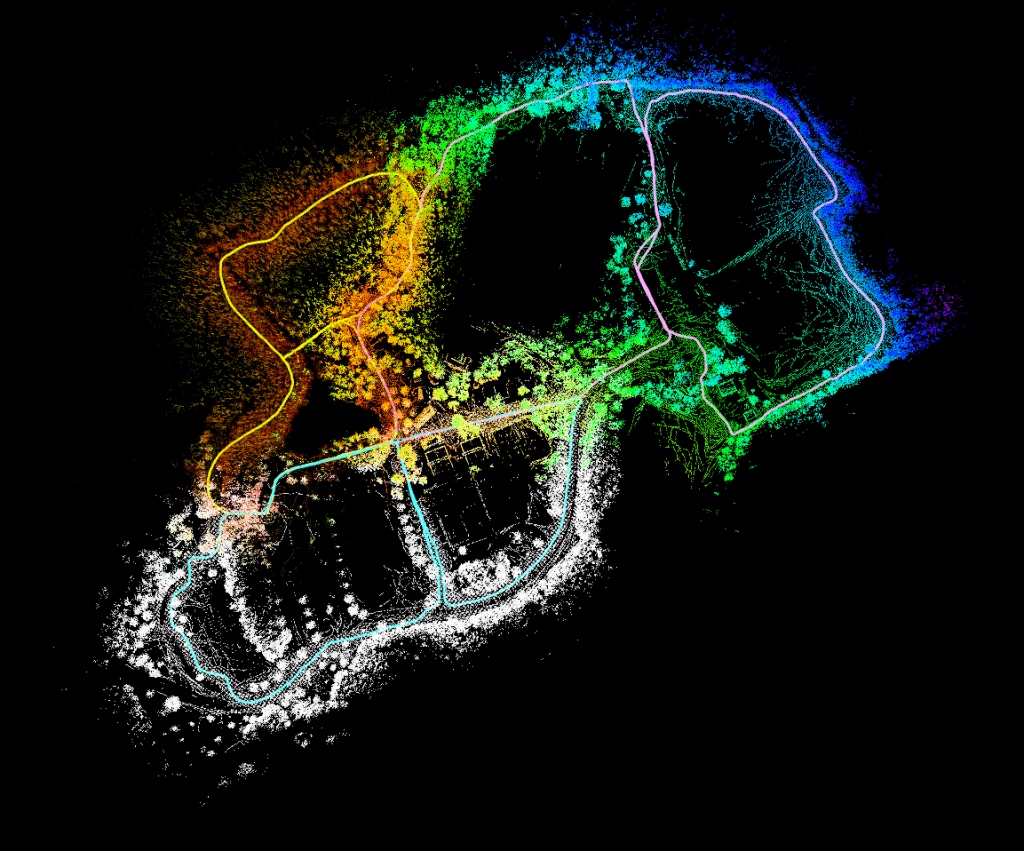 A SLAM solution produced by three Jackal UGVs, whose trajectories are shown in blue, orange, and pink. Each robot completes a separate “figure-eight” path through a large park, with a few segments that overlap with the trajectories of other robots. Their merged lidar point cloud map is also shown.

However, developing a SLAM system that meets these requirements would require lidar-equipped mobile robots to gather large-scale data sets for testing and validating their framework. Additionally, one of the biggest technical challenges within the multi-robot SLAM solution is the need for an optimization module that is capable of determining, with high accuracy and reliability, whether lidar scans from different robots collected at different times overlap with one another, and if so, what is the exact rotation and translation that will correctly align these lidar scans.

“It has been a very positive experience, and the Jackal UGV made the process of designing our experiments and making changes to our robots’ sensor configurations very straightforward and efficient.”

Traditionally, testing such a framework and extending it into new directions would take a lot of time and effort; precious resources that the team didn’t waste. They also didn’t want to build their own robots from scratch, as that would take away from the time needed to test and refine their algorithms. A final option would have been to carry the sensors in a handheld manner, but that would have made it difficult to make frequent changes to the configuration of sensors that ensure that the team can collect the best data possible with reasonable time and effort. 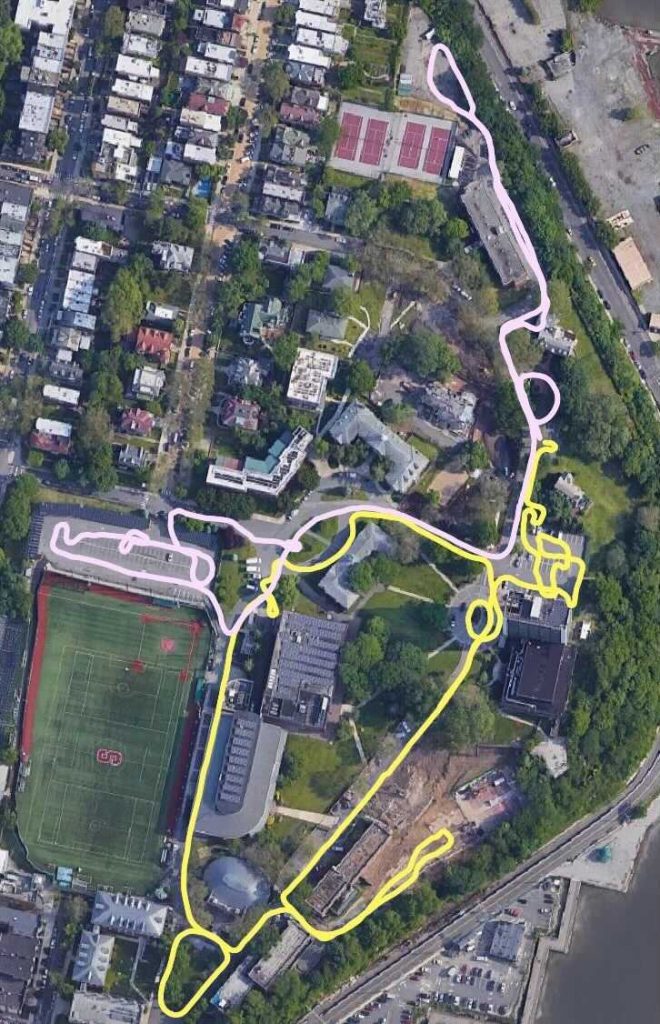 Another SLAM solution produced by two Jackal UGVs, whose trajectories are shown in pink and yellow. Each robot drives a different route through the Stevens campus, with a small number of rendezvous points where the robots cross paths. Their exchange of information permits the pink robot to produce a more accurate trajectory estimate.

That is why the team turned to Jackal UGV. By equipping the robotic platform with lidar and inertial sensors, they were able to develop Distributed Scan Context-Enabled Multi-Robot LiDAR SLAM (DiSCo-SLAM) framework and collect the large-scale data sets that they have relied upon for validating it. For data collection, the team used a Velodyne VLP-16 “Puck” lidar and a Microstrain 3DM-GX5-25 inertial measurement unit (IMU) to support each Jackal’s SLAM capability. The team found that these two sensors work well when fused together, permitting them to employ lidar-inertial odometry aboard each robot, so they can localize and map their surrounding environments with fairly high accuracy (which they hope to improve upon via multi-robot message passing). The team also used a Reach RS+ GPS to obtain “ground truth” information that they could use to evaluate the quality of their SLAM solutions.

Jackal UGV not only enabled them to easily gather suitable data and test their algorithms, but it also helped them continue to build on their solution by exploring higher levels of autonomy that rely on DiSCo-SLAM. As Associate Professor of Mechanical Engineering, Brendan Englot said: “It has been a very positive experience, and the Jackal UGV made the process of designing our experiments and making changes to our robots’ sensor configurations very straightforward and efficient.” 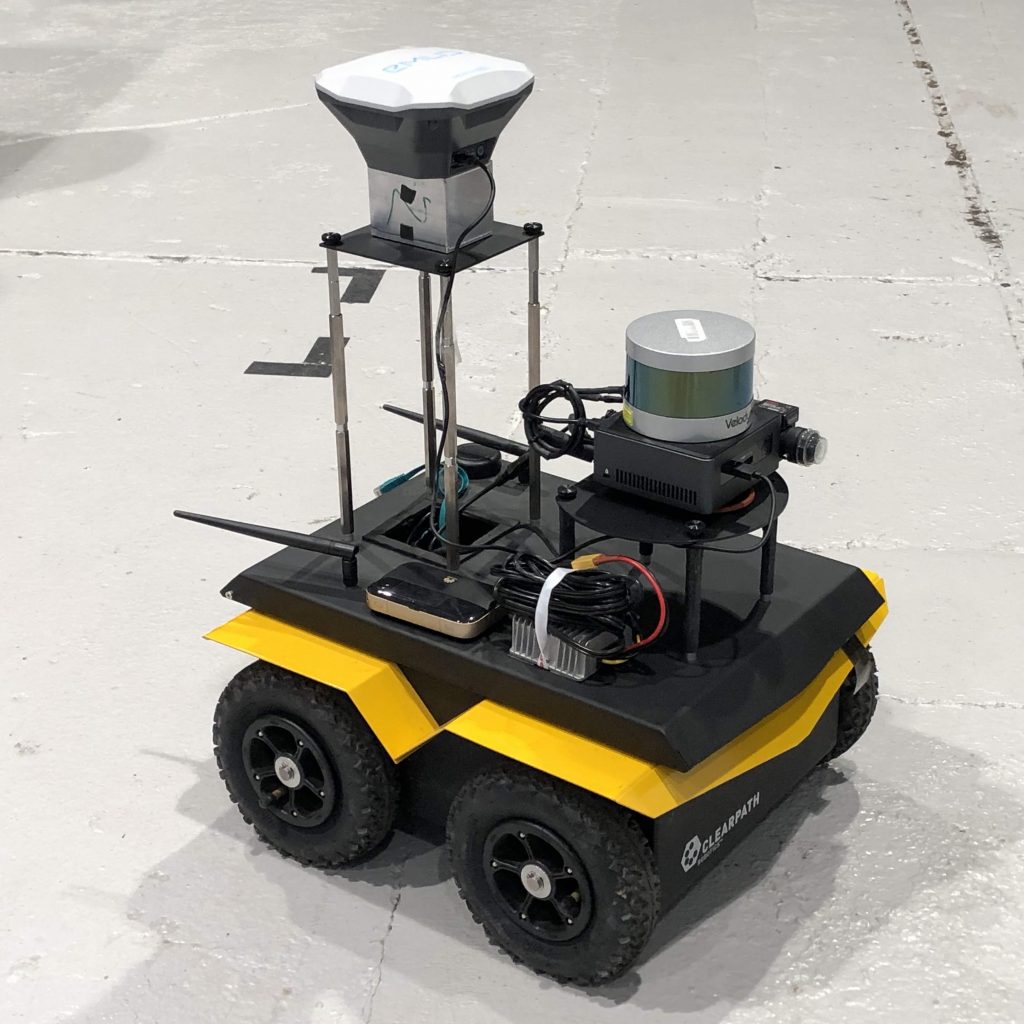 Giving Back to the Community

With the help of Jackal UGV, the team was able to validate the performance and data efficiency of DiSCo-SLAM over several multi-robot data sets (two of which used Jackal UGV), and they released their code and data for others to use. As well, their work will be featured in the April 2022 edition of the IEEE Robotics and Automation Letters journal (which is already available online, here). Now that the team has successfully run DiSCo-SLAM offline on various data sets collected by their Jackal UGVs, they would like to be able to run the framework live, on a team of Jackals that communicate wirelessly with each other. This would then permit them to develop an “active” version of DiSCo-SLAM that supports fully autonomous multi-robot navigation, in which the robots can use our framework to continually make decisions about where to travel next.

To learn more about the Stevens Institute of Technology, visit their website here.