Grizzly on the Mars Emulation Terrain at NCFRN 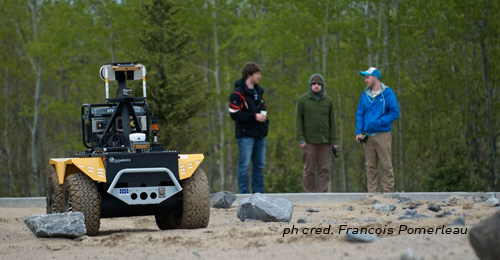 I recently spent over a week in Montreal talking with – and learning from – the Canadian field robotics community, first at the Computer and Robot Vision (CRV) conference and then at the NCFRN Field Trials. This was my first time attending CRV since I spoke at the 2012 conference in Toronto, and it’s quite inspiring how much robotics is spreading throughout Canada. Keynote speakers were Raff D’Andrea from ETH-Z and Frank Dellaert from Georgia Tech, both of whom had excellent talks. Bonus points to Frank for pointing out factor graphs to me for the first time, and Raff for bringing the best tabletop demo ever! 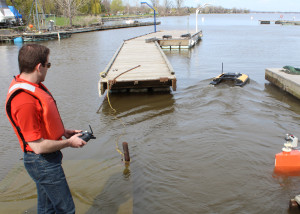 CRV transitioned right into the opening meetings of the NCFRN Field Trials. Or, for those of you who don’t like nested acronyms, the National Science and Engineering Research Council Canadian Field Robotics Network Field Trials. The NCFRN makes up Canada’s leading field robotics researchers, companies, and supporting government organizations, and has just marked its second year in existence. The first two days are filled with presentations, seminars, and poster sessions, and from there it’s into the eponymous field. Something which was both surprising and inspiring for me was seeing that Clearpath hardware represented every single ground vehicle and surface vessel in the poster session.

Spread from the Mars Emulation Terrain at the Canadian Space Agency to the east (aka, the “Mars Yard”) to the McGill MacDonald campus to the west, the field trials were quite the experience. Researchers and partners were able to see the algorithms operating live. They were able to collaborate on combining their technologies, and, in the most extreme cases, swapped code between robots to test how robust their approaches were. In my opinion, one of the most valuable aspects of the field trials is improving how testing and deploying autonomous vehicles in remote locations is completed. Teams’ preparations ranged from being as minimal and lightweight as possible to turning an entire cube van into a remote lab. 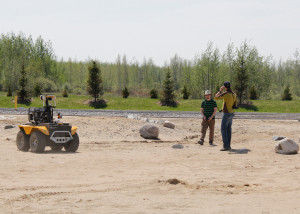 Grizzly on the Mars terrain

This years’ field trials also mark an important milestone for Clearpath Robotics: It’s the first time we’ve seen someone make coffee using our robots (at least, the first time we’re aware of it). Apparently it’s easier to plug a coffee maker into a Grizzly than it is to run an extension cord. I can understand why they were making coffee; this was the ASRL team which did 26 repeated traverses of nearly a kilometer each based on a single, visually taught route. And, since the ASRL has a thing for setting videos of our robots to music, here’s the research set to music. 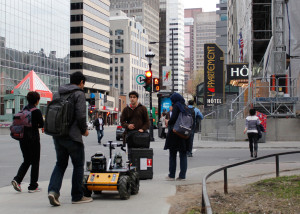 Taking Husky for a walk in Montreal at NCFRN

I’ll close off by sharing the kind of experience which keeps us going: On the last day of the trials, I could only see six robots left rolling around the Mars Yard. There were three kinds, and all were robots designed and built by the Clearpath team – we’re thrilled to see that our work is having an impact on the robotics community and we can’t wait to see how Year 3 Trials will go next spring!