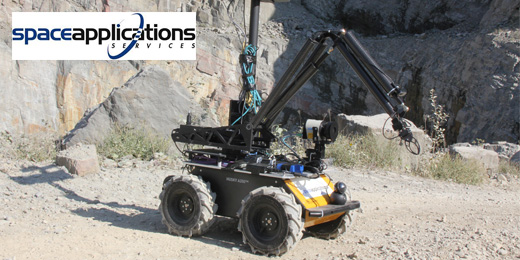 The Fukushima disaster was tragic, yet motivating. It catapulted the robotics world into disaster-response scenarios and ignited a sense of urgency to create autonomous, intelligent systems for rugged, hazardous environments. Spinning from this new found inspiration are events like the DARPA Robotics Challenge (DRC) and EURATHLON. Although DARPA holds a variety of challenges, EURATHLON is a completely new robotics competition and is supported by the European Commission with a vision to provide real-world robotics challenges that will test the intelligence and autonomy of rugged robots in disaster-response scenarios. Last year’s event was held in Bischofswiesen, Germany and focused on land-based scenarios, whereas 2014’s competition will be sea-based and 2015 will include land, sea and air scenarios.

The competition and the challenge

Of the dozens of teams competing at EURATHLON, Space Applications Services (SAS) was a top competitor. The team participated in four of the challenges including Mobile Manipulation, Urban Search & Rescue, Underground Search & Rescue (in a smoke filled environment), and a glorified obstacle course. “The primary goal for our participation was to give us an opportunity to put together the bits and pieces from different projects, and test it out in real environments and for real challenges, with a focus on the manipulation tasks,” said Yashodhan Nevatia, SAS Team Lead. Using tele-operation for all of the tasks, the team placed third in the Mobile Manipulation scenario and a very close fourth in the Underground S&R scenario. 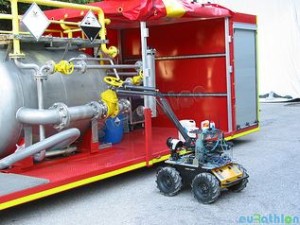 Although the team accomplished their goal, they’re not stopping there! They learned a ton at the event and have a big to-do list to get started on, “The competition was a massive learning experience – all the way from quick setup and on the fly debugging to procedures and methods to be followed in these scenarios,” said Nevatia.

Each of the scenarios had its own challenges – from valve task where the team realized their manipulator configuration was limited, to the smoke-filled tunnel where visibility was under a meter and a typical sensor like LIDAR wasn’t the fit for the job. “Having to operate in these scenarios gave a real insight into the ways that robotic platforms can be used for interventions in risky environments,” said Nevatia.

Husky for the hazardous

Space Applications Services is using Husky Unmanned Ground Vehicle as a shared research platform between a number of European Commission funded projects. Originally used in the Initial Training Network (FP7-ITN) INTRO, the Husky served as an autonomous assistant for first responders, capable of grasping objects and driving them to a designated disposal area. 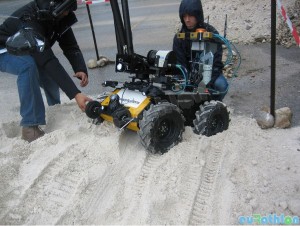 Since then it is being used in two FP7 projects: FASTER to test algorithms for autonomous planetary traversal for a future mission to Mars, and ICARUS where it supports the development of command and control interfaces for search and rescue robots (including a haptic interface for manipulation).

The course organized by the German Army was a very special opportunity – during the competition, it started raining, which gave the team a dose of reality for operating in wet conditions. “The course was primarily set up for tracked vehicles, and therefore we could not always pass over obstacles, but I think we managed to do rather well, and more importantly, once again, it was an opportunity to learn what ‘professional’ operators are looking for in the platforms and human interfaces,” said Nevatia.

The team’s path to success

In the last two years of preparing for EURATHLON, the team has faced a number of challenges to suitably utilize the capabilities offered by Husky UGV, ranging from rapid design of mounts for various sensors (from an actuated 3D LIDAR to webcams for hazard avoidance), to the addition of a wireless emergency stop, to quickly putting together spare batteries that are compatible with the platform. “With support from Clearpath, we were able to identify necessary modifications and cleanly implement the customizations where needed,” said Nevatia. “The Clearpath team has been extremely helpful, from troubleshooting issues at a day’s notice to helping us add sensors and features to the base platform!”

See how other teams are using Husky UGV in competitions